Out of the 2,629 people eligible to vote in the Students’ Representative Council (SRC) by-elections on the week of Oct. 1, only 317 of them actually cast their ballots. That is a 12.1 per cent turnout. Though this may come as a shock to students, this isn’t a new phenomena compared to previous years’ fall elections. So why aren’t students voting?

“I think every level, municipal, federal, provincial—our age demographic has always struggled to get people out to vote, there’s not a lot of interest there and it’s a sad reality,” says Brad Trecartin, SRC president. The answer as to why this happens can fall under a number of different categories. Tim Barton, Chief Returning Officer at UNBSJ says, “The factor that mostly affects voter turnout is the number of candidates running [for office].” In a graph documenting voting turnouts in every election since 2004, the spring elections are evidently dominating those in the fall. Since fall by-elections are to fill positions that weren’t filled in the regular elections, as well as to elect the first year reps, there are naturally less candidates running the second time around. 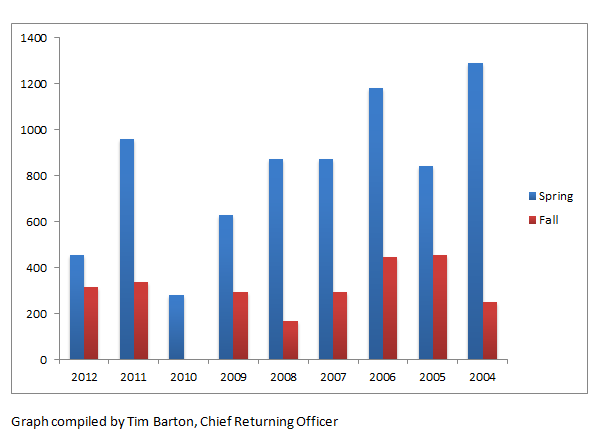 “Spring elections are generally more competitive, because you have people running for executive, too. They want people to know them; it’s a heightened campaign. Whoever is elected there is in office for a whole year,” says Trecartin. Those elected in the fall only finish out the term that was started when the executive was elected. There is more at stake when students vote in the spring, so they are more driven to vote at that time.

How candidates run their campaigns may also have something to do with voter turnout. According to Trecartin, “The way [the candidates] campaign and put themselves out there— the more they interact [with the students], the more people are going to pay attention. When you actually have competition, more posters, more people saying, you know, ‘here’s what I want to do for you,’ students are more likely to get engaged.” This year, the council is completely filled, whereas in previous years there have been vacant seats, “We are improving in the [sense] that more students are getting interested in running, which gives [voters] more choice,” Trecartin says. When the student body can see how the elections are directly affecting them, they are more likely to vote, though it can be a struggle sometimes, the president adds.

Another possibility could be the fact that students didn’t know their candidates. When first year student Mallory Smith was asked why she didn’t vote, she said that she “didn’t know anyone running.” Megan Ougler’s answer was similarly worded, “I didn’t really recognize any of the names, so I didn’t [cast a ballot].” The fact that UNBSJ is a commuter campus may play a large part in this. A majority of the students who attend the school stay for classes, but don’t really spend a lot of time on campus aside from that. They aren’t as likely to be involved in scholastic activities as a school whose in-residence population is much larger.

“Every year, a good chunk of the students’ money goes to support the SRC budget. It’s the students’ democratic duty; if they want to have a say in where that money is going and what our priorities are, they should have an interest in who is going to direct those priorities. Students don’t understand that their voice and who they mark their ballot for can really affect their whole year,” Trecartin says.

In the end, there may never be a solid answer as to why the student vote is lacking in the fall. What we do know though, is that we aren’t alone. At UNBF, the turnout at the fall by-election sits at an average of only two to three per cent. To see the results from this year’s by-election, as well as its statistics, check out your e-services under the voting tab.