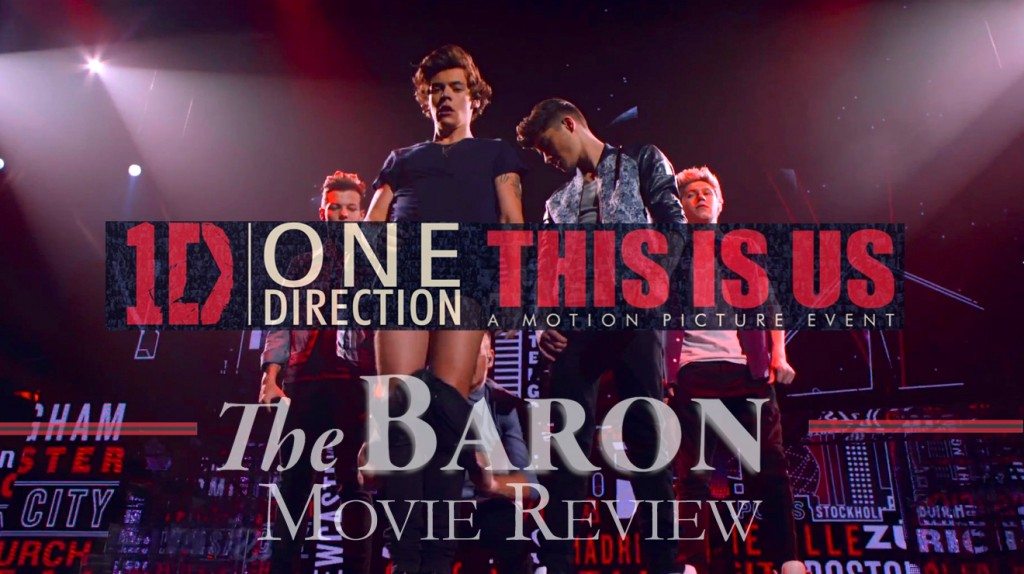 Director Morgan Spurlock has come a long way in reality-based programs. After taking on the fast-food industry in Super-Size Me, he has explored poverty, terrorism and produce placement with varying degrees of success. So, it’s intriguing to see the documentary filmmaker turn his attention to the celebrity of a boy band that has been in existence for three years.

One Direction: This Is Us covers the early years of the English-Irish boy band’s rise to fame, while intercutting concert footage of their Take Me Home world tour. The film’s first half-hour shows how all five members – Niall Horan, Zayn Malik, Liam Payne, Harry Styles and Louis Tomlinson – auditioned for the British talent show X-Factor, were formed into a group and gained a following. While they did came in third place, the group’s fan base encouraged X-Factor judge, Simon Cowell to sign them to a record deal. What they’ve done since is pretty well known.

Audiences who are expecting a meta-fictional comedy like The Beatles’ A Hard Day’s Night will be disappointed. Nor are there any revealing scenes of the band’s personal lives; for example, Styles’ much-publicized relationship with country singer, Taylor Swift, is never shown or addressed. The few emotional moments involve how One Direction’s fame has had an impact on their families, who are only able to see them in between concert tours and recording sessions. Styles’ mother and stepfather describe how their son left home at 16 and has never really returned.

The band members come off as likeable lads, but they fall into cliché roles not dissimilar to previous boy bands. As the fan-favourite “heartthrob” and lead singer, Styles can be funny and witty, but he shows an introspective side during a brief visit to his hometown.

Cool and collected, Liam Payne is grateful for the success he’s achieved in three years, but he’s aware that the band cannot go on forever. Quiet and soft-spoken, Malik admits to feeling lonely on the road for months, but he manages to return his mother’s support by buying her a house. Being the only Irish member, Horan is shy at times, but humbled by the overwhelming response from the fans. He also shows versatility on the guitar during rehearsals and performances. As the “quiet one,” Tomlinson is grateful to have gained four new best friends, but he rarely gets a chance to show what he brings to the group.

Despite being around for three years, the band describes how the act wouldn’t work without each member, but the film’s idea of their being the next Beatles comes off as pretentious. Their lack of choreography in their shows is also worth noting; several members jokingly admit they are “terrible” at dance routines.

Spurlock’s concert footage is beautifully shot and offers a glimpse of the spectacle of a One Direction concert. Several moments are shot in 3D and provide stunning visuals. The documentary also features interaction with several fans, most of whom are screaming teenage girls. Celebrities such as actor, Chris Rock and director Martin Scorsese make surprise cameo appearances – presumably having become fans via their children.

One Direction: This Is Us is a unique look at the life of the boy band, but it has little to offer in terms of anything revelatory.