Uptown Saint John was cool and crisp Saturday, Sept. 28. Autumn air billows out from the harbour as small groups of Sea-Dogs fans stroll through the boardwalk. Conversation on the patio is set against the distant pulsating bass flowing from Cougars just after 10:30 p.m.; the over-head heaters warming pint-sipping patrons outside. It’s an oddly slow and lazy evening; that is until the squeal of Traynor amplifiers and Telecasters shatter the lull.

Local band, Hand Drawn, squeezes their five-man sound onto the small Pepper’s Pub stage; opening for the main act. Rumours swirl about their lead singer being sick as his replacement read lyrics from a smartphone, sweating under the soft, warm glow of the red floodlights. Even still, the pop-rockers play tightly, achieving uplifting and powerful moments reminiscent of “Narrow Stairs” era Death Cab for Cutie and early Blind Melon.

As their set closes, the nine kids on the dance-floor hoot and applaud for the local quintet. The crew gather their gear as electronic world music plays through the P.A. The dance floor clears while lighters and cigarettes are pulled from pockets. The patio bubbling with loud, partially inebriated chatter, Hand Drawn loads their gear out of the bar.

After 45 minutes and more alcohol, the patio dwellers have both increased in number and become significantly apathetic to the goings-on inside. This is when Ontario-based pop-punker’s Cheap Speakers (sonically) kick their way through the bar, out onto the boardwalk. Punchy chords from the black-and-white, polka-dot dressed, Natalia Manzocco bust through Tim Dafoe’s distorted lead. The sound lead by steadfast bassist/frontman Brennan Gault and fueled by the empathetic drumming of David Kochberg; an infinite number of influences are immediately detected.

A cross between Sonic Youth and Bloc Party (with a plethora of other tones bubbling through) Speakers start off fast and only speed up. Manzocco plays the apathetic hipster, but the remaining male trio are anything but lethargic. Gault’s bald head reflecting the spotlights; it’s almost as if he’s slowly gathering energy and forcing it through the 12 dance-floor attendees and the rest of the band.

Never relinquishing their agility, Cheap Speakers play to a small, but fortunate crowd of about 15. Playing old and new material, the quartet finishes the night bigger than they started. Their hour-long set closes and their East Coast promotional tour for their album “Switches and Levers” comes to an end.
Gault, on Speakers’ performance style said to expect “sweaty performers up there to really deliver a show, not just play the songs or face the drummer the whole set,” adding the probability of, awkward but sometimes endearing stage banter.” These terms were met and exceeded in not only awkwardness and sweatiness but their ability to truly deliver a show.
The garage-y cadence which had invaded the evening now settled back into a conversational lull over electronic world music and overhead patio-heaters.
For more information about Cheap Speakers or to order their new album visit http://www.thecheapspeakers.com/ 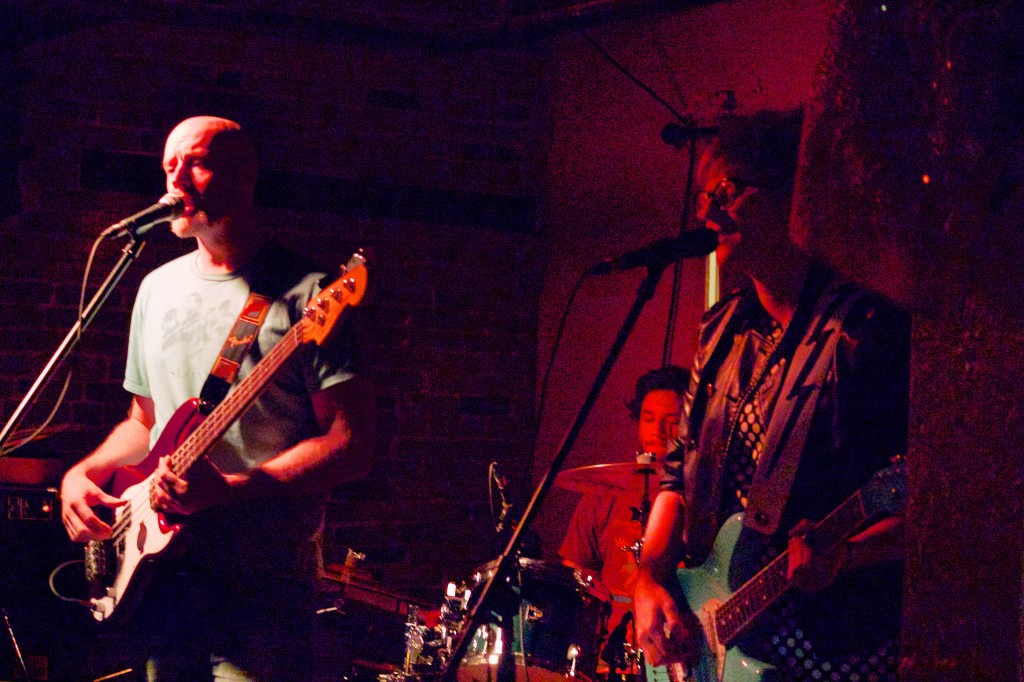