On Oct. 2, UNB Saint John hosted the New York Times Bestselling Author Patrick Rothfuss, who participated in numerous events on and off the Tucker Park campus.

Rothfuss’ debut novel, The Name of the Wind, was not only featured in the “One Campus, One Book” program at UNB Saint John, but also as one of the Lorenzo Reading Series novels. Rothfuss is the sole American author featured in the Lorenzo Reading Series, he currently resides in Wisconsin. What makes Rothfuss so unique? His debut novel was compiled, for the most part, while he was a student at the University of Wisconsin.

The Kingkiller Chronicle is Rothfuss’ highly acclaimed fantasy trilogy. The first two installments in the trilogy, The Name of the Wind and The Wise Man’s Fear are New York Time Bestsellers. Rothfuss is currently working on the third novel, which will be titled The Doors of Stone.

Rothfuss participated in a meet-and-greet luncheon, interacting with eager students who read his book via the “One Campus, One Book” program or the ENGL3782 Special Topics: Lorenzo Reading Series course. The lunch took place in the Potash Conference Room in the Hans W. Klohn’s Commons and allowed fans of Rothfuss’ fantasy work to meet him in person.

Immediately following the luncheon, Rothfuss was whisked over to the Hazen Hall Lecture Theatre for a reading for the “One Campus, One Book” program, which began at 2:00 p.m. UNB Saint John’s vice president Robert MacKinnon greeted Rothfuss with a warm welcome and an artisan mug, which greatly pleased the author. A little known fact about Rothfuss is that he’s an avid supporter of handcrafted—well, anything really! In fact, Rothfuss laughingly stated in an earlier interview that, “publicly, I don’t think I’ve ever confessed my irrational attraction to fancy, decorative soaps.”

If Rothfuss’ sense of humour wasn’t evident immediately, it was shining throughout his “One Campus, One Book” reading. Putting a spin on the traditional goings-on of authorial readings, Rothfuss didn’t read excerpts from the first installments of The Kingkiller Chronicle. Commenting that The Name of the Wind is “a beast and it’s huge,” Rothfuss instead treated the audience to a seemingly light-hearted children’s story entitled The Adventures of the Princess and Mr. Whiffle. Despite the title, this fairytale is very much not for children.

As a scholar, Rothfuss is critical of how expectations can lead readers astray. The not-so-subtle incorporation of violence in his fairytale was largely glanced over by the audience in the Hazen Hall Lecture Theatre, proving how the associations that go hand-in-hand with children’s stories effect interpretation. Few in the audience noticed the macabre atmosphere—and blatant beheaded teddy bears—in Rothfuss’ Adventures.

Kelli Gunn, a UNB Saint John student enrolled in the Lorenzo Reading Series course, later commented that Rothfuss was “hilarious and quirky” and that the reading “flew by way too fast.” Gunn attended the 2:00 p.m. reading in the Hazen Hall.

Later on, Rothfuss read at the Grand Hall uptown at 7:00 p.m. for the Lorenzo Reading Series. This time he chose to read a humour column, the likes of which he wrote for ten years as a student (and professor) at the University of Wisconsin. Kyle Roberts, a student in the Lorenzo Reading Series course who attended Rothfuss’ later reading, says, “oddly enough he didn’t bother reading from his novels, but there was a sense that it would be unnecessary.” Rothfuss’ mock-advice articles were a means of letting out his more sarcastic—though overwhelmingly comical— personality.

Rothfuss is an author whose works are already being studied in an academic environment, an experience few writers are able to witness during their lifetime. The study of his novel at UNB Saint John, in Rothfuss’ words, gave him “a warm, fuzzy feeling.” When he isn’t writing his next New York Times Bestselling novel, Rothfuss comments that he’s typically doing the following: “I read a ton. I try to be a good dad. I try to hangout with some of my friends.”

Overall, Rothfuss is a humble and very down-to-earth man. He’s a father, a boyfriend and just so happens to be internationally renowned for his fantasy writings.

To find out more on Patrick Rothfuss and The Kingkiller Chronicle, visit www.patrickrothfuss.com 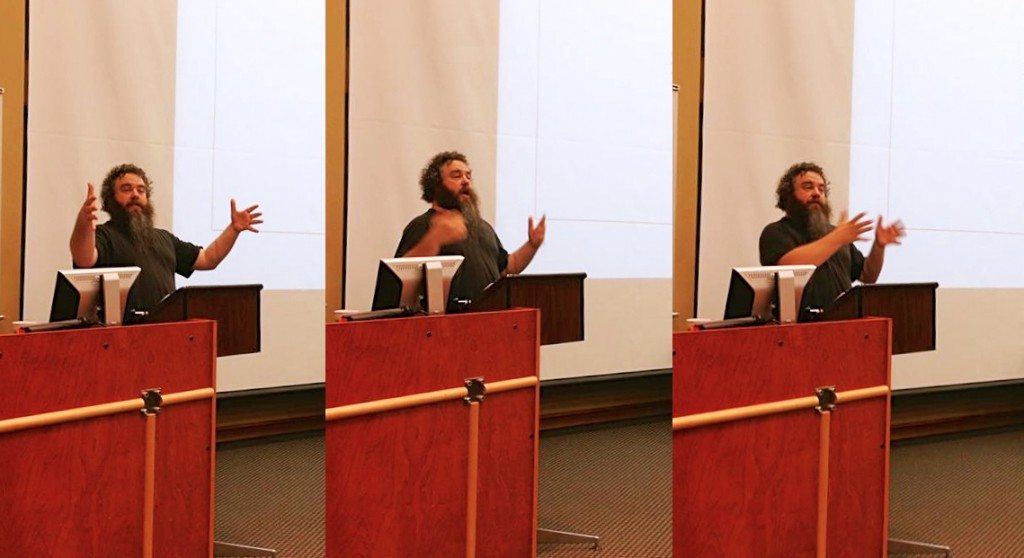