A new club kicked off its first year this week, as UNB Saint John is now home to an Indoor Soccer League.

While the league may be new to UNB Saint John, it’s not a new concept to coordinators Phil Vautour and Michael Crate. The two started their own soccer league during their high school years and are taking their experiences to the university level.

“I don’t know if you have ever tried to get onto a soccer league, but they are [pretty set],” says Vautour, “they go from year to year, with the same players each year, but they never add more teams, says Vautour. “With a lot of the students at [UNB Saint John being] international, they don’t have a chance to [play] on a team. Year to year they’re not here, so they need something now.”

With such a strong international base, Vautour and Crate saw an opportunity to put in a league targeted toward this group and it has definitely paid off. “Two-thirds of the league are international students,” says Vautour. “We have about 60 players and I think that’s a pretty good turnout for the first year.”

It wasn’t all easy however, says Vautour. “This whole thing was a fight. We didn’t get out gym time and when we first posted it, it wasn’t approved”.

However, with a set gym time in hand and good numbers, Vautour and Crate have big plans for the league. Consisting of four teams, the Red Barons, the Chipman Royals, the Irving Oilers and the Oland Brewers, the league will play every Tuesday and Thursday at 2:00 p.m. in the G. Forbes Elliot Athletics Gymnasium. They are also proposing a playoff format off of first place playing fourth place, second place playing third place and the winners of each match facing off for the championship. Vautour does admit that “it’s a bit of test and see, especially with the playoffs”.

The real test though began this past Tuesday, when the first match was played between the Irving Oilers and the Chipman Royals squared off. The match was a success for the league, as the camaraderie and love of the sport was present throughout the match.

In the end, the Oilers managed to squeak out the win with a score of 2-1. Arthur Daniel had both goals for the Oilers, while Suhayd Alghamdi countered with the lone goal for the Royals. 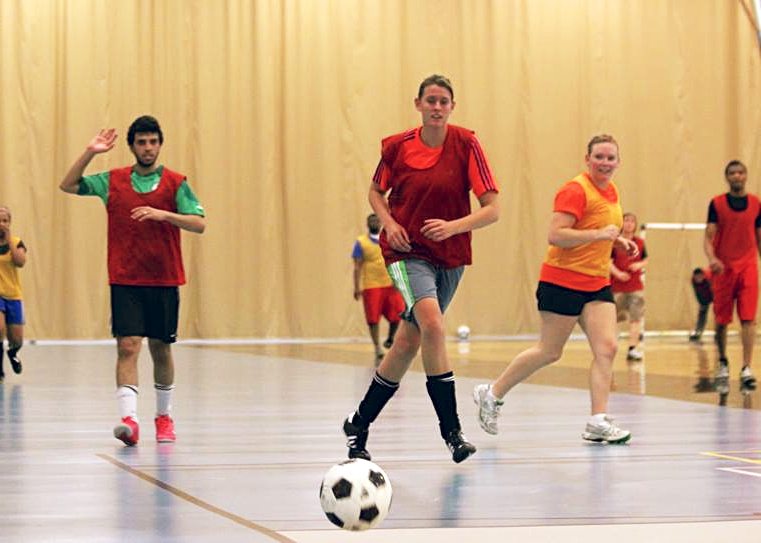