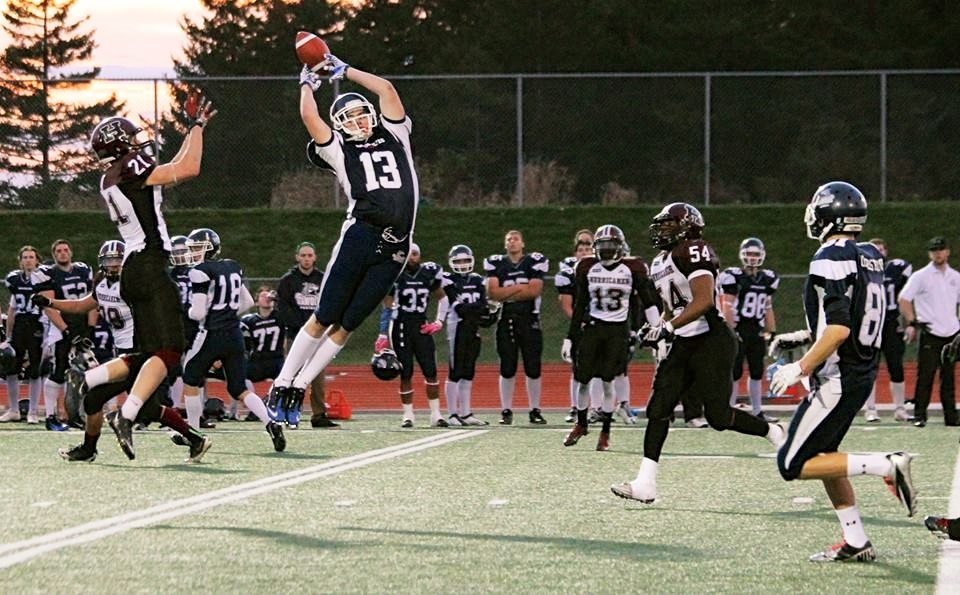 With another season in the books for both clubs, it came down to one final game: winner-take-all for the AFL Championship on Saturday, Nov. 2 at the Canada Games Stadium. In the end it would be the Holland College Hurricanes coming out on top over the UNB Saint John Seawolves and they claimed the championship by a score of 20-12.

The tone of the match was set early in the first quarter, as both team’s offenses tested the opposing side’s defense, looking for any cracks to jump out to an early lead. It would be the defense who would come out on top, as neither side managed to put up big points. The quarter would end all tied up at 3-3, as both sides managed to kick a field goal.

As the second quarter began, the physicality of the match took over. However, this would prove costly to both sides, as penalties began to play a huge role in the match. The Seawolves were the first to fall victim to this trend. Early in the second quarter, UNB Saint John would fumble the ball on their own 20 yard line which was recovered by the Hurricanes. Adding salt to the wound, the Seawolves were called for a face mask penalty, which moved the Hurricanes forward another 10 yards.

This was all they needed, as the Hurricanes’ quarterback found a man wide open in the end zone to score the game’s first touchdown. The lead would be short lived though. Midway through the half, the Seawolves put together an offensive drive of their own, capitalizing on a face mask penalty against the Hurricanes. UNB Saint John would punch the ball in for their first touchdown, tying the game up at 10-10.

The score would stay deadlocked until the last minute, when Holland College punted the ball through the Seawolves’ end zone and scoring a single point to take a slim 11-10 lead into halftime.

The euphoria of a touch down saving defensive stand would be short lived though. The Seawolves’ defense managed to contain the Hurricanes’ offense deep in their own end and Holland College was forced to concede a safety in order to avoid giving the Seawolves excellent field position.

With their two points on the board, UNB Saint John took their first lead of the game, up 12-11. No lead was safe in this match, though and the Hurricanes would prove this late in the quarter. After an excellent punt return, the Hurricanes marched deep into Seawolves territory. The UNB Saint John defense looked to make a stop, but were unable to stop the Holland College quarterback, as he kept the ball himself and ran it in for the touchdown.

Looking to increase their lead, the Hurricanes elected to go for the two point conversion. The Seawolves’ defense came up big, sacking the quarterback and keeping the Hurricanes from picking up any additional points. The quarter would though, with Holland College up 17-11.

With only 15 minutes left in the match, the fourth quarter was do-or-die for each side. Both sides went back and forth, trying to claw back into it or maintain their lead. With under six minutes to play and still trailing through, the Seawolves’ defense came out onto the field looking to make a big play. At the five minute mark, it appeared that they had done just that.

Initially, it looked like Holland College may have fumbled the ball and the Seawolves scooped it up to take possession. However, after discussing the play, the referees called the play back and instead called it an incomplete pass for the Hurricanes, giving the ball back to Holland College. This was a tough pill to swallow for the Seawolves, as time continued to expire in the final quarter and may have had an effect late in the game, as the Seawolves threw an interception with just under two minutes remaining.
Sensing that they had the Seawolves on the ropes, the Hurricanes proceeded to run the ball 80 yards down the field on the very next play after the interception and would kick a field goal with about a minute left, to take a 20-12 lead. The Seawolves took over the ball and looked for a miracle on a hail mary pass with under 30 seconds left. However, it was not meant to be, as the Hurricanes would intercept the ball again and let the clock run out to win the championship, 20-12.