Keeping with the status quo, UNB maintained its position for the most part in this year’s Maclean’s University Rankings.

The university ranked fourth out of 15 for “best overall” in the comprehensive ratings.

“This is reason for everyone who is at this university – our students and our staff and our faculty – to be pleased. It’s good for us to be number four in this ranking,” said Dr. Eddy Campbell, president of UNB.

UNB also maintained its number-one spot in the category of “number of library holdings per student” and second place ranking in student-to-faculty ratio.

Its number 15 (last place) position in the “portion of budget devoted to scholarships and bursaries” category has not changed over the past three years.

While there were gains and losses in other categories, they were relatively minor.

“We went up in some reputational rankings and that’s very gratifying,” Campbell said.

In the “most innovative” category, UNB rose from 26th to 23rd out of 49 universities.

“UNB has been talking a lot about [innovation] for quite a long time and we’re quite good at it – and we’re finally being recognized for it,” Campbell said.

UNB went down most notably in the category of research grants, placing sixth out of 15 and dropping two rankings from last year.

Campbell said that he doesn’t want the university to work towards the Maclean’s rankings.

“That seems to be a misapplication [of] our efforts. I don’t try to administer our university to those rankings,” he said.

“The fact of the matter is we need to treat our students well. We need to do all the things that produce really good graduates. We want people to really enjoy coming to work at UNB. I’m happy if things turn out our way and for a while now they have.”

UNB Student Union president Ben Whitney said the Maclean’s rankings leave out an important aspect. While Maclean’s magazine publishes the results of student opinion surveys, they are not used to calculate the overall rankings.

According to the Maclean’s student satisfaction survey, 24 per cent of UNB students, in their final year, recorded having an “excellent” experience with their university education and 55 per cent of students said it was “good.”

“[The overall ranking] is more about research grants, library holdings, faculty-student ratio [and] student retention, which are all good things, but it didn’t look at student satisfaction . . . That’s the biggest one for me because that obviously paints a very different picture,” Whitney said.

In the latest Canadian University report for the Globe and Mail, UNB ranked last in student satisfaction in their category, earning a grade of a “C+.” Whitney said it’s this ranking that was concerning.

“I think it’s because students aren’t really satisfied with their quality of education here. I don’t know what it specifically is. I’m still delving into it. But the fact that it is that low is concerning. We’re trying to figure out what it is,” he said.

“To see us ranked fourth in [Maclean’s in] the [comprehensive] category is a positive thing for sure. I wasn’t greatly surprised. The student satisfaction one [in the Globe and Mail], I was a little more surprised about and was a little more disheartened over for sure,” he said. 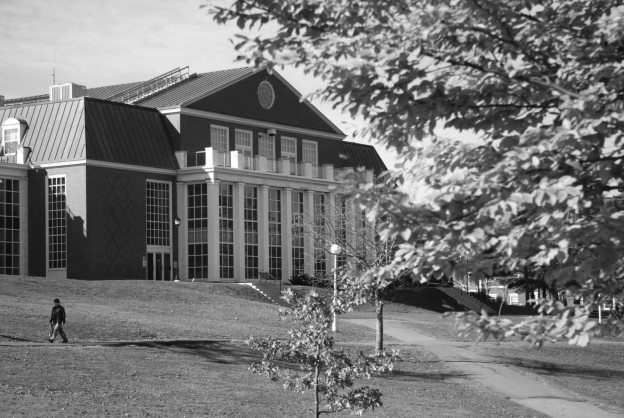