On Saturday morning this past weekend, a small group of Greenies took the inter-storm window of opportunity to go for a hike in the Springfield area to search for the famous Midland Ice Cave!

Sean and Brenda came out to pick up Mark, Mathieu, and Natalie at UNB, with the sun already shining in a clear blue sky and the roads melting from the previous day’s storm.  We all piled into the truck and got cosy for the 45-minute drive out to Springfield.

We arrived at the road-side sign to find a very icy start to the trail – it led us along a fence next to a farmer’s field for the first 1 km or so, and had been scoured by the wind.  But with a minimal amount of slipping, we made into the wooded parts of the trail where the snow was good for walking.  There was good signage until the trail forked right before the caves – then we got a little lost!  We went left first, found a dead end with VERY deep snow, then right, where we decided to stop and see what we could find for navigational information on Google Maps with Mark’s phone.  Although we couldn’t find any coordinates or waypoints, we opted to follow the slope of the land into a nearby ravine, where it seemed likely that an ice-cave would develop from the small creek.  Our gamble paid off! 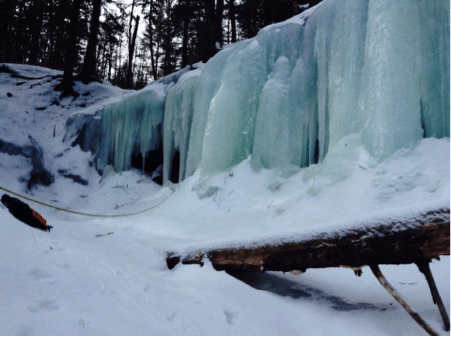 Despite having taken the more difficult route (the side-trail going to the cave was only about 50 m into the right fork of the trail – we had gone about 500 m then walked into the ravine and climbed back up to it), we were all pretty happy when we found the cave, as it was worth the effort! 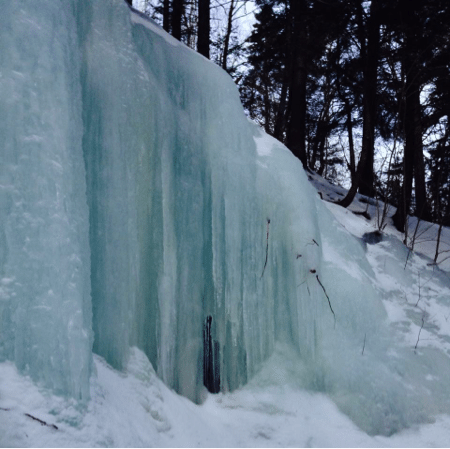 The cave is the result of a wide waterfall from the creek (which itself seems far too small to create such a thing) that overhangs a naturally formed and shallow cave in the sandstone rock.  It probably gets as wide as it does because of a protracted freezing process – smaller ice dams would form as nights get colder in the late fall, and slowly push the main flow of the creek to one side or another of the usual flow.  As the dams become larger and icicles begin to creep over the edges, the falls would continue to widen, eventually covering most of the overhang with beautiful blue ice stalactites and closing off all but the smallest of entry holes. 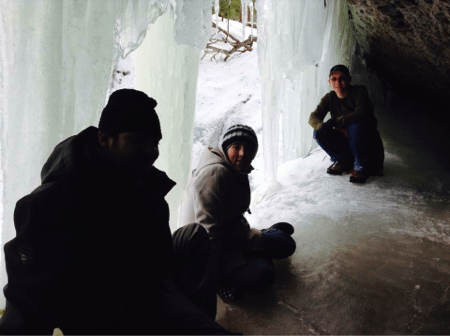 Luckily, the smallest of entry holes had been slightly widened by previous hikers – and we had no trouble climbing in.  The inside of the cave was beautiful – lit through the ice-waterfall, much of it had a bluish-green hue, accentuated with a vibrant green from the frost-tipped mosses and lichens that covered the reddish sandstone of the cave’s back.  On the floor was a solid sheet of ice, creating a natural slide that sloped gently from the top to the bottom.  And, with the exception of a slight echo when we spoke, the cave was incredibly quiet – the kind of quiet were you can hear each-other breathing!  If only the study-spaces at the UNB were so quiet… 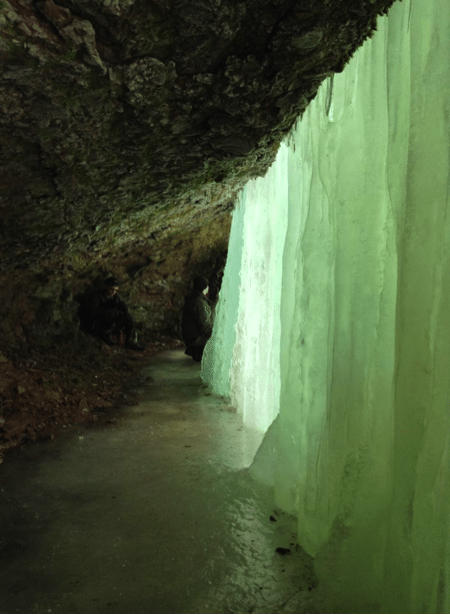 Shortly after we had our first good look through the caves, other hikers started to arrive, and having had our fill of Mother Nature’s splendour for the day, we took our last photos and retreated to the trail, making our way back to the truck for the trip home.