Students of UNB Saint John are gearing up for the upcoming Students’ Representative Council (SRC) elections.

Jessica Buck, vice president social, says the council members look for the most suitable candidates when considering applicants for both categories of elected and hired positions. “In the hired positions, someone who best fits the job description of each hired position would be the one hired,” she says. “When it comes to the elected positions, it’s by vote, of course, so whoever the student body sees fit to do the job is the one who gets it.”

For example, when looking for the new VP social, the person who has “the best social skills, ideas to improve campus life and the resume to top it off ,” would be the one who gets chosen.

Since Feb. 24, forms have been available for students who would like to apply for council positions. The process tends to get a lot of candidates, but it largely depends on the positions that are available. Buck explains she was one of four people to apply for VP social last year.

“I think each year it gets better and better,” she says. “Of course, since we do not have a voter turn out for this year yet, we cannot assume it will be better than the last, but it’s something we hope for. Student politics is very important.”

Ashley Macosky, president of the SRC, says that there are no restrictions on who can or cannot run. He expresses a desire to see “active and informed students” who want to make a difference on campus. “When it comes to hiring, we expect applicants to know the job they are applying for,” he says. “In the past, people have put their name in just because, without knowing the role. We prefer students with council experience; but it is not required. Team players who are willing to do more than the bare minimum is also an expectation.”
The hiring committee is an important part of the process. Based on the university by-laws, as Macosky explains, it can consist of up to five members. “However, convention would have the incoming executives do the hiring, since they are the ones who have to work with the new members and are the ones that should be accountable for the hiring.”
Every applicant is interviewed, unless they are unqualified for the position they apply for. “If a student applies for more than one job, we select them for an interview for the position we feel they would best fill.”
For example, the VP social typically gets six to 12 applicants and fewer might apply for the Finance position. Macosky says it seems to depend on how the previous year went. “If the social life was good, it looks easy and more people want to try to be the party guru,” he says. “Finance seems to depend on co-op placements. The more students that are in the program, the less apply but we cannot hire a co-op student since they are not on campus for much of the year.”
Macosky says it is up to the hiring committee each year to determine and avoid any possible conflicts of interest, if any. “This year, I separated the VPs during the process depending on who was applying for which position,” he says. “Each VP had a friend applying for different roles and it was easy to avoid. Even non-executive roles were done in this manner to avoid the issue.”
There has been a problem in getting more students to vote. While schoolwork, jobs or other commitments keep them busy, a lack of interest is why many haven’t voted in past elections. “Some students couldn’t be bothered,” says Buck. “That would probably be the biggest downfall, otherwise I believe students are interested to see who their next SRC is, including our wonderful councilors.”

During elections, Macosky says the voter turn-out appears to correspond with the number of candidates running for council positions. “The more people that run for various positions, the more people vote,” he says. “Last year 30 per cent of students voted and the previous year, 17 per cent. Both are too low and the numbers fluctuate from year to year.”
Macosky says that not many students follow the council’s activities; “I would like to say that students pay attention to what we are doing; but I don’t always feel that is the case.” He cites the council’s focus is on pressing issues and working to improve campus life. “Much of what the SRC does is behind the scenes and boring. Meetings, advocacy, policy suggestions and that sort of thing aren’t very glamorous and interesting to most,” he says. “That’s where the improvements for students get made. As long as the social life is bumping, students are happy and more apt to pay attention.”
Another problem stems from the university’s policies on posters being hung around campus. “Already this year the cleaning staff has removed election posters from some areas,” says Macosky. “Poster boards get clogged up and covered and we are only allowed so much space to communicate in the commons.”

Buck remembers when she threw her hat into the ring for the VP social. “When I applied, I was extremely nervous. I was previously the Arts rep and wanted to move up to a bigger role.” She got to experience the selection process first-hand by being interviewed for the position. “The date of my interview was the first day I got my braces on and I could barely speak- so I thought for sure I wasn’t going to get the job,” she says. “Luckily for me, I had really good ideas which I did follow through with and despite not being able to talk I did my best to be as bubbly and outgoing as I usually am!”

While students begin dropping off their applications, Buck says she hopes the next SRC will be a strong one. “Of course, I cannot speak for everyone, but I would really enjoy more people being involved and the most deserving get awarded with their roles.”

Macosky has a pragmatic view of the upcoming election and those who apply for positions on the council. “Elections are the great unknown. We never know what will be contested or who will run,” he says. “We always have to wait and see who is running for what when the nominations close. The selection process is up to the student body.” 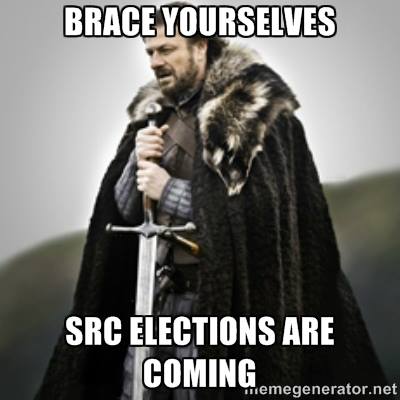