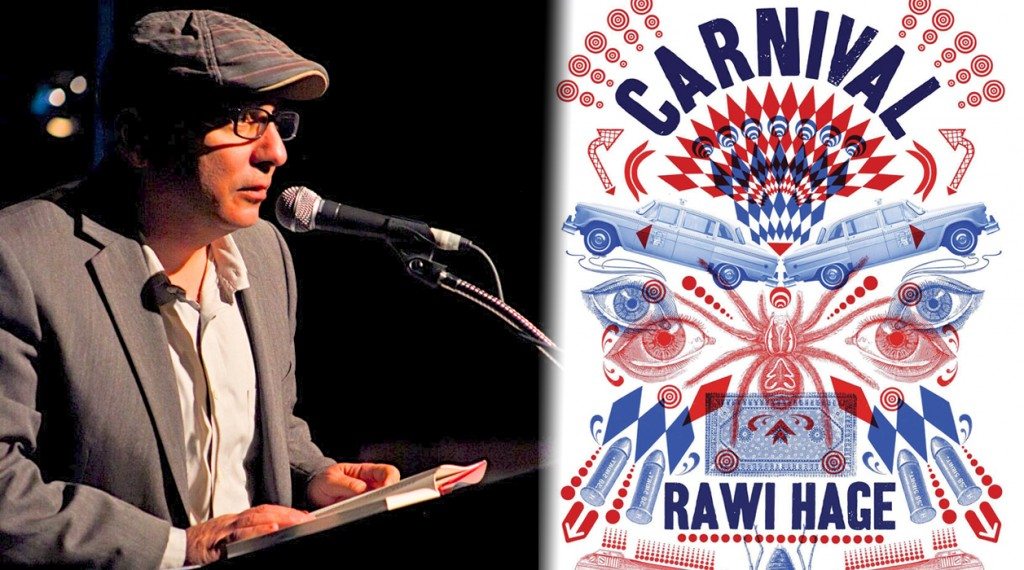 The most surprising thing about Rawi Hage is that he never intended to make a career out of writing. “I was never a good student,” he says. “I still have some kind of dyslexia. I never thought I would be a writer.”

Last Thursday, as part of the Lorenzo Society Reading Series, Hage appeared at the Ganong Hall Lecture Theatre to read from his 2012 novel Carnival, which won the International IMPAC Dublin Literacy Award. The plot involves a taxi driver named Fly and the diverse group of individuals he encounters in a seedy, unnamed city. Specifically, it is Fly’s driving around the city and his search for meaning that drives the story forward.

Hage began by reading the novel’s opening, in which Fly experiences his early life growing up in a circus. His short, visual description of horses, elephants and circus performers were vivid in all of their details. In keeping with the title, the novel is set at the height of the city’s carnival, and Hage uses absurdity and the debauchery of these characters to explore the darker aspects of society.

During the question and answer session, Hage was asked about how Cockroach, his second novel, and Carnival have a lot in common by the theme of the great Canadian dollar and his political-themed commentary. One woman noted that the stories had a way of “examining society from the ground up.”

By his own admission, Hage doesn’t believe the idea that one book can save a nation or community. “I think it is a religious notion and formula that despots use- either from the Bible or the Green book or Red book. So I feel celebration should come from a more collective effort. I think it’s such a big responsibility for a writer to save a nation, especially a writer like me who doesn’t believe in nation-states.”

Hage has a unique approach to the writing process; he does little, if any, research prior to working on a novel. “If there’s something I don’t know, I check facts,” he says. “I’m not a researcher or systematic in my writing. I believe writing should be the conclusion of life, a process. It’s what comes at the end. So I don’t do research- I read, I live. I start with a faint idea of what the novel’s about.”

He attributes his writing style to not being of a studious nature. “I can’t research for ten years and write a paragraph,” he says. “You have to live. You can absorb quantities of water, stay with the fish, release the excess and see what stays- I’m reading Moby-Dick by the way.”

Born and raised in Beirut, Lebanon, Hage grew up reading adventure books and comics, but his literary tastes were just beginning to develop. “During my childhood, we were forced to read Arabic poetry, and I think that is why my writing is lyrical and poetic,” he says. “At the age of 15, we were forced to read Arabic poetry, memorize it, stand in front of the class and recite, upon which we were graded.”

Hage also spent part of his early life in Cyprus. He moved to the United States during the mid-1980s. “When I went to New York, my English was good,” he says. “I read the New York Times to see what was going on back home in Lebanon.”

On the subject of the political situation in Europe, Hage has a unique point of view towards Russia. “I see the Russians as Easterners, so I kind of understood those cultural affiliations,” he says. “It is really tragic. They’re not afraid of the fantastical stories. They don’t switch between realism and fantasy- the latter that I find is a kind of absurd satire. The French absurdist is more existential.”

After working as a photographer, Hage earned an MFA from the University of Montreal. He spent some time as a cab driver in Montreal- a noticeable connection to Carnival’s Fly. During this period, he began work on his first novels. He says, “When I finished De Niro’s Game and Cockroach, I was still cabbing.”

Hage says the writing process is of varying length, but he says there are a few constant factors. “I tend to finish my books very quickly- I won’t say how long,” he says. “But I can consecrate myself: when my girlfriend leaves, I sit in one place, stay away from the Internet, drink a lot of coffee and write, which is kind of dangerous for a writer to do. One day, you might end up with nothing. There’s always alcohol, I guess.”