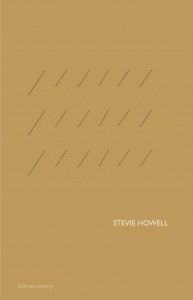 Reading alongside one of her literary icons Don McKay, Canadian poet Stevie Howell participated in the Lorenzo Reading Series at the UNBSJ campus on Thursday, Oct. 2. Howell read some poems from her poetry collection Sharps for the 30 plus people in attendance.

Stevie Howell’s collection which is technically untitled, with hieroglyphics on the front cover that have been interchangeably used to represent water. These symbols all have the same sharp point at the tip of them, which is where the book got the name Sharps. Stevie’s poetry collection is comprised of 36 poems.

Howell read several different poems from her poetry collections. The poems read were “Out Patient Methadone Pharmacy—Help Wanted,” “A Girls Will,” “Four Men,” and “The Crook and the Flail.” Each one of the poems that Howell read either came from experiences that she has had, or from stories she was told as a young child.

During the Q&A, a member of the audience asked if Howell could further explain where she got the name and the cover of the book. Stevie commented that, “There’s a lot of water in the book. I wanted to use it (the hieroglyph)… I sort of didn’t know my own reason, so I met with a really great poet… who talked it through and helped me see what I’ve been writing about… the shapes that kind of recur…it seemed to all fit together. I had the title first, I didn’t even know my own motive.”

Another question that was asked was about the meaning of “sharps”. It was pointed out that not only could the word “sharp” be used to describe the imagery on the cover of the book, but Howell commented, “The ‘Sharps’ thing for the hospital is where you get rid of the needles”. Sharps is a metaphor that can work in many different ways, and it applies to the hospital setting because Howell works in that environment and many of her poems have themes relating to that medical environment.

When asked which authors have inspired and influenced how and what she writes, Howell responded with this: “There’s been a lot. I feel both a blessing and a curse to read Don McKay because he’s an absolute hero, many many year long hero… He’s in my Pantheon… A couple people who I guess were students of his, Ken Babstock and Karen Solie. They’re both phenomenal poets and were teachers to me.”

Howell gave this interesting reason for why she began to write poetry, and for why she has continued, “I remember poetry being the first thing I tried or read that I remember thinking ‘I want to figure out how that works’… I used to take everything apart to see how they worked. I remember reading this one specific poem where I thought ‘I want to try that, I want to see how that gets assembled.’ So maybe it was something about the structure of it. What you’re able to do within the confines of a structure.”

For aspiring authors and poets, the advice Stevie Howell has for you is as follows, “I would say read widely, read as much as you can. Sometimes when people first start trying to publish they get rejected and kind of lose heart, absolutely don’t lose heart and don’t take it personal. Take the criticism into account… Try to see the good in it. This is a field where you’re building relationships, so try and see where they’re coming from.”