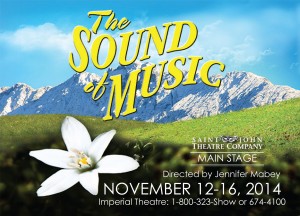 Thursday night’s showing of “The Sound of Music” was a delightful success. The cast performed the musical in such a way that even those who had not seen the famous movie starring Julie Andrews were able to follow the story with relative ease.

Despite technical difficulties that occasionally affected the microphones, the Saint John Theatre Company’s diverse cast persevered and put on an excellent show.

All of the classic songs made famous by “The Sound of Music” film were performed beautifully and with appropriate levels of energy. The cast’s rendition of “Do Re Mi” was particularly well done, with a few humorous additions in between parts of the song.

The set pieces themselves were well done and well thought out, showing audiences precisely what about the mountains so enchanted von Trapp and Maria, while still effectively building an image of where in their world they are located.

In terms of acting, Hilary Branch played a poignant Maria, effectively and efficiently conveying how deeply Maria cares about the von Trapp children. Her initial scene with Brian Dobbelsteyn’s Captain von Trapp was quite amusing, particularly when they began arguing about the whistle.

If the retelling of a childhood classic is not enough reason to see the show, the acting of Rachael Ahearn, who steals hearts with her portrayal of young Gretl, may be further incentive.

CC Humphries’ portrayal of Uncle Max was a delightful blend of humour and seriousness, infused with narcissistic quips that had the audience laughing. Mary Ann Melvin’s Frau Schmidt was presented as strict, yet the character still managed to be funny, especially when she informed Maria about the curtains.

“The Sound of Music” will be performed again Saturday night, and will have two matinees on Saturday and Sunday. Tickets are $37.50 for adults, $33.50 for seniors, and $10 for students with a valid student identification card. Tickets can be bought at the Imperial Theatre box office or online at their website: http://www.imperialtheatre.nb.ca/.