On Saturday the Seawolves football club started off their season on a sober note as they mourned the loss of teammate, Peter Fox, a 22 year old engineering student and proud seawolf. As a part of the tribute the team has raised $20,000 for a scholarship in Peter’s name.

The team also honoured Melissa McKeon at the game. McKeon was a medical research coordinator at the canada east spine centre as well as a trainer for Saint John High School and the Seawolves football teams.
“The locker room was super emotional before the game even started” says Danny Oliver, linebacker coach for the Seawolves “there was a little added pressure going into the game because of who we were playing for; it meant a lot to most of the players”
The Seawolves took on the University of New Brunswick Fredericton Red Bombers at Canada Games Stadium with Johnathon Atherton putting the Seawolves on the board at the start of the first quarter.

“I think we played well overall throughout the game, just made some mental errors that hurt us, but I’m really proud on how the guys didn’t quit near the end of the game” says Oliver.
While playing a strong game the Seawolves walked off the field losing 37-21. 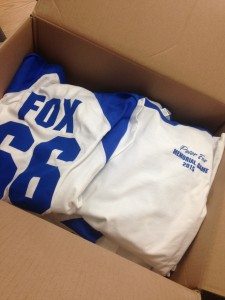 “Overall the team played well, and towards the end we saw a positive sign of cohesive team forming, we now know what we need to work on this week at practice to prepare us for our week 2 game against Holland College” says Jordan Tracey of the Seawolves.
The Seawolves continue their season this Saturday at the UPEI/Holland College Hurricanes. Game time at 1pm.