This week kicks off the Student Representative Council nomination period for their annual by-elections. Student nominees are encouraged to sign up for the seven available positions with the SRC, including 2 first-year representatives, an athletics rep, business rep, and a mature student rep. Two other available positions include members of the senate, one being a two-year term, and one being a one-year term.

The Baron spoke with Emily Fox, vice president External of the SRC to discuss the upcoming nominations. “These elections are not as big an event as the ones that happen in the spring. These are just for the spots that haven’t been filled,” states Fox. 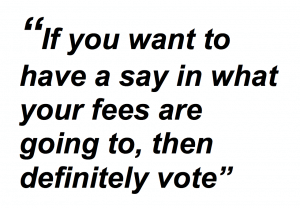 The SRC nominations began this Monday and continue until Friday. At any point students can stop by the SRC office, which is located in the Thomas J. Condon Student building behind Howler’s bar where they are encouraged to ask questions of any of the SRC members and to pick up a nomination form. Forms can also be picked up at the SRC booth during club days, hosted on the 23 and 24 in the student center.

Nominees who go on to become student representatives after the elections have a few required roles, including meetings. Fox explains that “they’re required to help out with SRC events, like the first class bash […] we encourage students to also represent a certain group, like an arts rep, to really put themselves into their shoes and represent them on the board, so even if it may not be their point of view, it’s sort of like being a politician”, recommending that student reps speak openly for their field.

Fox states that other important aspect of the SRC includes “putting on events that get students out, and not just academically involved but socially involved as well. Providing spots for people who perhaps have similar interests, like putting a society together.”

Transparency with the student body is another issue that Fox stressed during the interview. “You can ask any of us questions–we’re not going to be offended. If you feel like something isn’t being done properly, come speak to us, because otherwise, we don’t know what’s going on”.

Fox encourages students to vote “If you want to have a say in what your fees are going to, then definitely vote”. The voting process will be available on the eServices page of myunb, under ‘elections’. On the left hand side, there will be a tab that says ‘Student Representative Council Elections, 2015’. Once voting begins, a link will be made available.

To pick up nomination forms, stop by the SRC office or by the booth at Club Week, or ask any SRC member. Fill out all information on the form, with signatures, and return them to the SRC office by 4pm on Friday.

Elections begin the week of the 28th, with voting beginning on Thursday, October 1st.

(Since publication the SRC has changed the dates of the campaign week and voting periods multiple times. Please check the SRC website for most accurate information.)