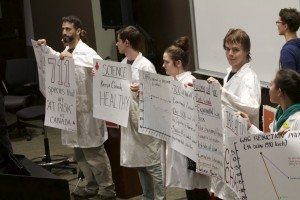 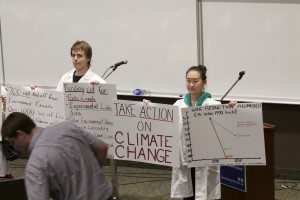 Approximately 8 students from the green society of UNBSJ, clad in lab coats, and holding signs, marched into the Ganong lecture theatre before the start of an all candidates federal debate at UNB Saint John. The signs related to the lack of evidence based policy in the federal government, muzzling of federal scientists, and cuts to environmental protections.

The Baron spoke to Sean Haughian a participant in the demonstration and PhD student at UNB Saint John.
“The green society was concerned with the lack of environmental, health and science questions in the debate as well as lack of discussion about these issues nationally. We have not been very politically involved in the past but we saw this election as an opportunity to get involved.”

“we decided that we needed to use the opportunity (of the debate) to engage with students on the issue concerning science policy and how it relates to environmental and health policy. I think we succeeded in doing that.” Haughian added.

The demonstration lasted for a few minutes before the start of the debate, intentionally avoiding interruption.
“the last thing we want to do is mimic the divisions in our political parties to the students on campus” he continued.

“I find that students with ideological barriers and interested in very different issues are often far less divided and far more open to collaboration with others compared to our national political parties.” added Haughian

The debate was hosted by the Political Science society and Emily Fox of the SRC at the university and included all the candidates from the Saint John – Rothesay riding.