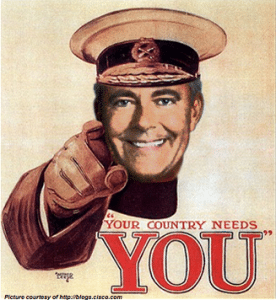 As the month of October lumbers on and the back-to-school anxiousness begins to fade, it is time to start focusing on what Canadian news-media has been focusing on since the Duffy trial went on hiatus: the 2015 Federal Election.

Before you click away because you consider “politics”, “election”, and “voting” three of the most repulsive words in the english language (other than “Chris Brown comeback” and “Cumulative 3-hour final”) give me minute to explain why voting is actually far more important than you may think.

I often hear people say, “I don’t care who wins” or “I’m just picking the lesser of two evils” or “I don’t have a way of voting” or “I am literally a horse and am not allowed to vote.” While the latter is a legitimate excuse, the others are about as valid as “my dog ate my online assignment.”

If you have muttered any of those falsehoods, let me guide you through the errors of your ways.

I don’t care who wins.

On its surface, not caring is seems like an absolutely valid reason not to vote. However, make sure you actually mean you don’t care and aren’t actually just uninformed or lazy.

I get it, I would much rather binge watch an entire season of Gilmore Girls than research policies, platforms, proclamations of political parties, but you may actually be surprised by what you find.

Climate change, university tuition, the legalization of marijuana, levels of financial and humanitarian aid to developing countries, military funding, and immigration are all potential topics for Wiz Khalifa’s next album, but they are also issues that are surrounding this election.

There are many tools online to discover which political party you may align with. Canada.isidewith.com is just one of many that can help guide you on the path to who you may be interested in voting for in this upcoming election. Maybe you’ll even discover your political party soul mate.
It’s like Tinder, but more political and with no chance of unwanted or wanted sexual undertones.

“My vote doesn’t matter.”
Oh, but it does, it really really does.

According to Statistics Canada, more than one quarter of eligible voters did not vote in the 2011 election, furthermore, according to The Globe and Mail, only 38.8 percent of eligible voters aged 18-34 voted in the 2011.
Compare this to the older voters, aged 58 and up, who had a turnout of over 70% and it’s a no brainer: Young people need to get out to the polls and make their voices heard.

Older generations may be more likely to align with politicians who support the more traditional values of the society that they grew up in. Back when a screw was a screw, and the wind was all that blew…You know, back when we were a less tolerant, inclusive, country “the good ol’ days”.

It is our responsibility as the young voters to show that we care about the direction our country is heading and we do not want to be ignored. Remember that policies are created for the people who turn out, not for those who say their vote doesn’t matter. Democracy by its very definition allows us a voice and representation.

“I have no way of voting/I don’t know how to vote.”

Every single Canadian has the right to vote, even prisoners are able to vote. Saying that you have no way of voting is completely untrue, if fact, you may have more options than you think.

Thankfully, you stumbled across this article (and by some stroke of bad luck are still reading it) because all the information you need is here.

First, everyone must register. Now you might be thinking that you are cutting it close however, you can register right at the polls. Just show up with your photo ID and proof of address and voila, in like Flynn (whoever that is).

If you are living on campus or are away from home, do not give up hope! There are still a number of ways you can still vote.

Despite only living in the riding only for school you may still vote in it.Once again all you need is proof of residency (your residence life coordinator has a nifty form for that) and a photo ID.

Voting is a privilege that is refused by so many. Please do not let the opportunity for your voice to be heard go to waste. Remember: policies are determined for those who turnout. This is true at the federal, provincial, municipal, and even at our smaller campus community.

If you live in Saint John, and have more questions visit the Elections Canada office located at 555 Somerset Street North.

Op Ed: Student tips for success on getting a job