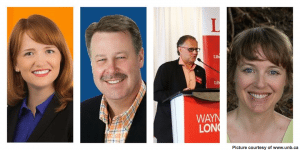 An all candidates debate was hosted at UNB Saint John on October 6, drawing over 200 staff and students to the event hosted by the Political Science Society and Emily Fox of the Students’ Representative Council. The four major parties were represented by their respective candidates for the riding of Saint John – Rothesay at the debate moderated by UNB’s own Dr. J.P. Lewis and answered the questions and debated the topics presented to them from suggestions on the facebook page.

The planning team from Political Science Society considered the event a success, with the theatre over half full.

The format consisted of questions covering a range of topics, all taken from the debate’s Facebook page. The candidates received the questions before hand, and were each given two minutes to answer, followed by a 5 minute moderated discussion, in which the candidates were given a chance to challenge and respond to each other’s stances.

Key aspects of the various policies were outlined by each candidate, and sometimes running counter to their party’s official stances, such as Liberal candidate, Wayne Long’s staunch support of the “energy east” pipeline project.

Student issues were the main focus of the event although there was a strong line of questions surrounding the environment. Long, running for the Liberals, stated that his party was committed to doubling grants to full time students.
Rodney Weston, Conservative MP and incumbent candidate, claimed that the government has created 5,000 new internships for students.
AJ Griffin, candidate for the New Democratic Party, said that her party will phase out student loan interest by 2017. She also said that a NDP government would not “place debt on the backs on Canadian youth”.
Green Party candidate Sharon Murphy pledged to end tuition for university students as well as help pay current outstanding student debt. She also spoke of a student corp. that would employ and train students.

Some other highlights of the night included Long, noting that Weston had yet to participate in a Pride Parade, with Weston responding by stating that the only parade he participated in as MP is the Canada Day Parade.

Griffin also came under attack over the NDP’s proposed budget but stuck by her statements despite Long saying that, “the Parliamentary Budgetary Office has said that the budget has more holes than Swiss cheese.”

Murphy of the Green Party played to the crowd throughout the night often bringing attention to candidates straying from student issues. Murphy was not spared from challenges that her stances on some environmental issues are not in line with recent announcements from the party leader, Elizabeth May. Murphy also performed an original rap during her closing statements.

The debate provided an excellent opportunity for students faculty and staff to ask questions to their candidates specific to the region and help inform them in their decision of October 19.

Election day is October 19 with advance polls opening this weekend.
For more information about the election or how to vote, visit electionscanada.ca/ and for a handy tool to help understand the main parties positions visit votecompass.cbc.ca/