Over the past few decades, science-fiction films have become major box office successes. Stanley Kubrick’s 2001: A Space Odyssey proved to be the ground-breaking movie of 1968. George Lucas’ Star Wars and Ridley Scott’s Alien followed within the next decade. In 2013, Gravity became a surprise hit and an Academy Award-winner, while Christopher Nolan’s Interstellar was one of last year’s blockbusters. Now, Scott returns to the science-fiction realm with The Martian, based on the novel by Andy Weir. 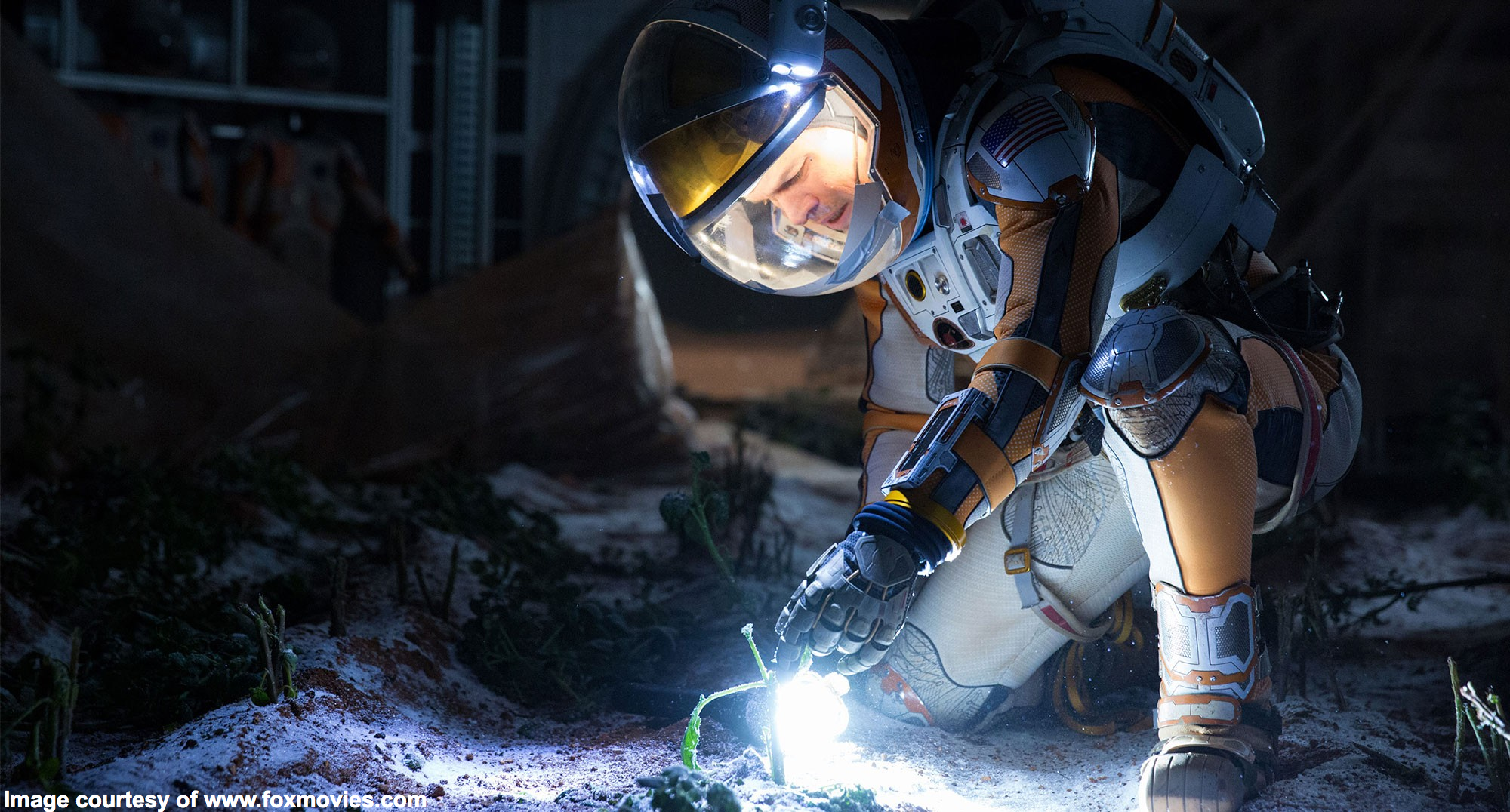 Astronaut Mark Watney (Matt Damon) is part of a manned expedition to the planet Mars. Halfway into the mission, a severe hurricane causes Commander Melissa Lewis (Jessica Chastain) to issue an emergency evacuation. During the process, however, Mark is struck by a piece of debris and lost in the storm, forcing the crew to leave without him. Back on Earth, NASA tells the world about the supposed tragedy. However, unknown to everyone, Mark is alive and has less than a month’s worth of supplies left. Using meager supplies and his botany skills, he devises a scheme to grow potatoes within the astronaut’s base. Against the dire conditions, he manages to create food and water to live on, but he is determined to survive and escape Mars. Meanwhile, after monitoring satellite activity, NASA determines Mark is alive and begins to plan with a rescue, but they are torn between assigning the returning crew to retrieve him or waiting for the next manned mission.

Damon does a stellar job as Watney, whose journey is the emotional arc of the film. Since he is alone for the majority of the plot, he has to project fear, desperation, loneliness and optimism. His recorded video messages are gripping, emotional and at times funny to watch; the latter stemming from his multiple attempts to pass the time and his extreme dislike of disco music.

The rest of the cast delivers solid performances. Jessica Chastain provides a steely yet troubled turn as Melissa. Her agony at having left Watney behind and devotion to her crew is one of the film’s highlights, especially when she is forced to make a similar decision in the film’s second act. Kate Mara, Michael Pena, and Sebastian Stan have supporting roles as the rest of the crew, but they have little more to do than spout lines of exposition or pondering what they must do. Jeff Daniels (The Newsroom), Sean Bean (Game of Thrones), Kristen Wiig (Bridesmaids) and Donald Glover (Community) round out the cast as NASA personnel who are at odds with each other over how to rescue Watney.

Scott’s film is a notable for its attention to the smallest of details. In cooperation with NASA, the filmmakers have strived to make the film as plausible as possible. The film’s cinematography by Dariusz Wolski is beautifully-lit, giving a breathtaking yet cold look at life on another planet. Instead of using green-screen technology, Scott chooses to shoot most of the film’s sequences in Wadi Rum, Jordan, in which the soil is of a reddish-orange hue similar to Mars.

The Martian is one of the year’s best films- and one of Scott’s finest works to date. Damon, Chastain and the cast give great performances. Special praise must be given to Scott’s crew, in terms of cinematography, VFX and scientific-accuracy.