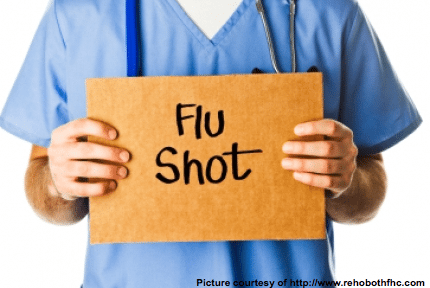 Flu season is right around the corner in Saint John, and with it, a side of needles. A flu shot clinic with said needles, organized by third year nursing students Shelby Clark, and Monica Newman, will be hosted at the student health centre, as part of their clinical experience.
If you, like many, resist the many benefits of getting a flu shot for fear of needles, it may be considered understandable. However, your fear of the flu should be much greater. If it is not, the flu shot clinic may have stickers or other rewards* for big, brave, boys and girls enticing you to come out.
Now wait a second, I heard the flu shot is bad for me?
If you have ever been in a dentist’s office waiting room at 3pm, you have probably been forced, by your own boredom (or secret obsession), into watching The View. Which means you probably have been exposed to one of Fox TV’s many, “Resident Crazy White Ladies”, Jenny McCarthy and her preposterous proposal that vaccinations cause autism. The idea, of which, has only spread because a woman trying to rationalize her son’s condition, happens to have a way to reach a mass audience of daytime television viewers.
There is no evidence or statistics that back up this claim. In fact, you know what is infinitely more likely to cause a mental disorder in your child than vaccines? Being a crazy lady. Rant over. Back to main point.
The flu shot clinic will all be held at the student health center, located in the parking lot behind the gymnasium. These are also free of charge, as those attending are doing a service to the nursing students’ education.
Winter is coming. And unlike Game of Thrones, it’s coming fast, or at least at a realistic pace. This is real-life winter. It does not wait for your climate-dependant storylines to resolve. It is coming, and with it brings the unforgiving, undiscriminating flu.
If not for yourself, do it for the children. Do it for the Vine. Do it… for love. Get the flu shot.
The clinic will be taking place on October 29 from 09:30am-11:30am, October 30 from 09:30am-11:30am and 1:30pm-3:30pm, November 3rd from 09:30am-11:30am, and November 6th from 09:30am-11:30am.
There will also be an information booth outside of Ganong Hall Lecture Theatre on October 23 from 9am-4pm, and October 27 from 9am-12pm. Here, one could find helpful information about the flu, the clinic, and again, the possibility of colourful adhesive rewards**.

*The Baron has not received any indication that there will be rewards given out, however, we can always hope.
**Really hoping.