December 6 is the National Day of Remembrance and Action on Violence Against Women
marking 26 years since the devastating Montreal massacre in which 28 people were shot and fourteen women killed, by a man who had been denied acceptance to the school. 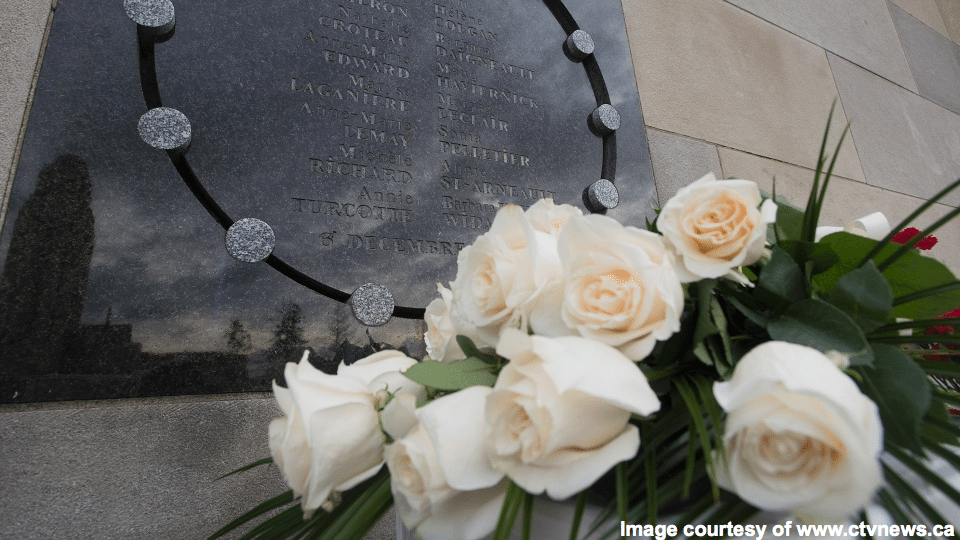 The memorial, organized by Social Sciences professor Dr. Chris Doran and held at Grand Hall, is to commemorate the women who have lost their lives due to violence, and has been held every year for over twenty years.

During his speech, Dr. Doran answered the question: why do we still commemorate this day? by stating that it is “as much about education as commemoration … why we pay tribute is just as important as paying tribute”.

Zack Peabody, a student of Dr. Doran’s, offered to help with the event and stated that he thought the memorial was important for the next generation.
“ I was born in ’96, so I wasn’t even (around) when this happened. So it’s important for people to know that it used to be like that. Fourteen women died, because one guy didn’t get accepted into the polytech”.

During the memorial, there were a number of powerful speakers, speaking up against domestic violence.

Kayla Nickerson, a survivor of assault by a man she deemed a close friend, told her heartbreaking story. Nickerson stated that “You never know. I didn’t think that it would happen to me”. She also said, “I don’t want any women to go through this … it takes your self esteem away, it hurts you, you don’t feel worthy. But this won’t define who I am … I’m not going to become a victim because of this”.

Grant explained that when she heard the statistic that 1 in 5 women will experience sexual assault in her lifetime, she thought of her 5 younger cousins, and worried for what they might experience.
She argued that “1 in 5 is not a number, it is a face. When you hear the words ‘first mourn, then fight for change’ I want you to picture the 5 women you love most in this world, and I want you to get pissed off, I want you to get angry on their behalf”.

Winchester finished by saying that, “I’ll end this by how I usually end these talks, by asking everyone to continue this conversation about sexual violence and gender violence. As long as this conversation is happening and we are challenging ourselves, we are doing something about it”.

Current statistics state that 1 in 5 women will face abuse or assault. These statistics do not account for events that go unreported. Often, victim-blaming and shame can keep women from reporting these events to local authorities.

Mike Landry, reporter for the Telegraph Journal and reporting on the Saint John Law Courts stated that New Brunswick is the domestic violence capital of Canada.
Landry says that in many of the stories he has worked on, the victims were ashamed.
“This is what we’re talking about: shame. That digs into the heart of New Brunswick’s problem; silence isn’t going to stop that shame”.

Landry also explained that New Brunswick lacks a domestic violence intervention legislation. He argued that as a community we need to work at making these changes by talking to people in power, that we need to demand change: “we need to lobby government, demand change, and transform talk into the tangible”.