Students had the chance to explore UNB Saint John’s various extracurricular opportunities on October 5 as part of this year’s Club and Society Fair in the quad.

While there was a good turnout between classes, student responses varied concerning whether or not they plan to actually join any of the clubs present.

A lack of free time seemed to be the biggest reason students were shying away from taking part in extracurricular activities. Particularly among first year students, there was a fear that additional work would be too much to manage.

“Some of the clubs do look interesting. If I had more time, I would want join them,” was the response of first year student Harley Harrity. 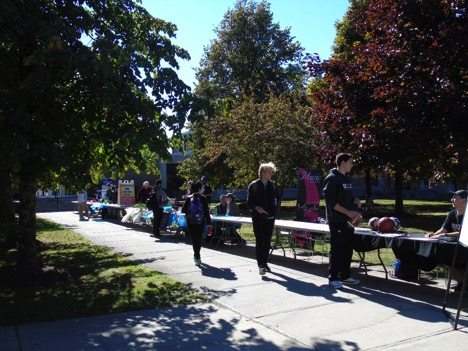 First year students are not alone in this fear, either. The general consensus was that a lack of time is why students are not interested in any of the clubs and societies on campus. Heavy course loads and off-campus jobs make the idea of adding onto their workload unsettling.

“I don’t have the time,” said second year student Solonge Lanteigne. “Between working and studying and trying to maintain my social life, it’s impossible.”

For other students, a lack of time has nothing to do with why they don’t join clubs and/or societies. They were interested, but bad experiences in the past turned them against the idea of trying to join anything else in the future.

Second year student Amal Hedar shared her story about a negative experience she had last year.

“I looked into a couple of clubs when they were set up outside of the library, and I joined one but nothing ever came of it. I signed up for their email list, but there were no emails about group meetings sent out. That was the one and only club I had signed up for, so I ended up not doing anything at all,” said Hedar.

It was the students who actively participate in clubs and societies on campus that were the most keen to join new ones. Third year student Rachel Friars, co-editor of Vox, found a few this year that caught her attention.

“I would consider joining other clubs on campus. I really liked the Golden Key Society, that’s raising money for a literacy group in the city – that would be really, really amazing. The Lorenzo Reading and Music Series is also one that I think is very important on campus, and in Saint John, so I’d really like to help with that, as well,” said Friars.

Friars was among a very small number of third and fourth year students present at the fair. Most of the people exploring their options were either in first or second year.

“A lot of upper year students, myself included, don’t feel the need to seek out a new club because we’re already settled in the clubs and activities we’ve been doing for our first few years.”

The club and society fair was overall a success for those looking to recruit new members with many students signing up to get involved, with many clubs very happy with the turnout.

Ben Manzer, who organized the SRC event, plans to host another expo day at the beginning of the winter semester for students who didn’t get a chance to come out this time.

Those interested in joining or starting a club are encouraged to talk to Manzer to get more information or visit the SRC website.