Although the Seawolves started off strong against the Tommies, winning the first two sets 25-21 and 25-22 respectively, the defending ACAA champions showed their determination to defend the title, coming back to win three straight sets on Sunday at the UNB Saint John Athletic Center.

The Seawolves gained momentum early on in the first set and climbed to a 15-8 lead before the defending ACAA champions went on an 8-3 run.

The teams traded points until Zane Hamilton and Luke O’Grady both recorded kills for UNB Saint John, bringing the score up to 23-21.

Samuel Irvine and Hamilton each proceeded to nab service aces, pulling off a win in the first set, 25-21.

The score remained very close for much of the second set, with the Tommies leading for the majority.

The Saint John squad managed to break even at 22 points and service aces from Hendrik Compagner, Chad White and Irvine pushed the Seawolves to a 25-22 victory in the second set.

The third set started off quite similar to the second, and the game remained close. St. Thomas seemed to pull away with a series of points and found themselves leading the Seawolves 24-21 off a series of kills from Francis Sirois and Stephane Blinn.

Saint John showed signs of life with a kill from fifth year player Nick Fraser and a service ace from Campagner, but with no points to spare, a Seawolves’ error handed the Tommies their first set of the match.

Reinvigorated, St. Thomas took an early 2-0 lead which led to an extended back and forth battle between the rivals.

Following a couple of attack errors by UNB Saint John, the Tommies were able to maintain the lead and took the set 25-22.

Coming off the momentum from their two set comeback, St. Thomas brought the same intensity into the fifth where they took an early 2-0 lead and never looked back.

The Seawolves appeared tired and were unable to respond to St. Thomas’ 11-2 run, until a big kill from Irvine showed a spark of life.

Unfortunately, Saint John was unable to further capitalize on this momentum and strong defensive play frustrated the Seawolves who lost the final set 15-5. 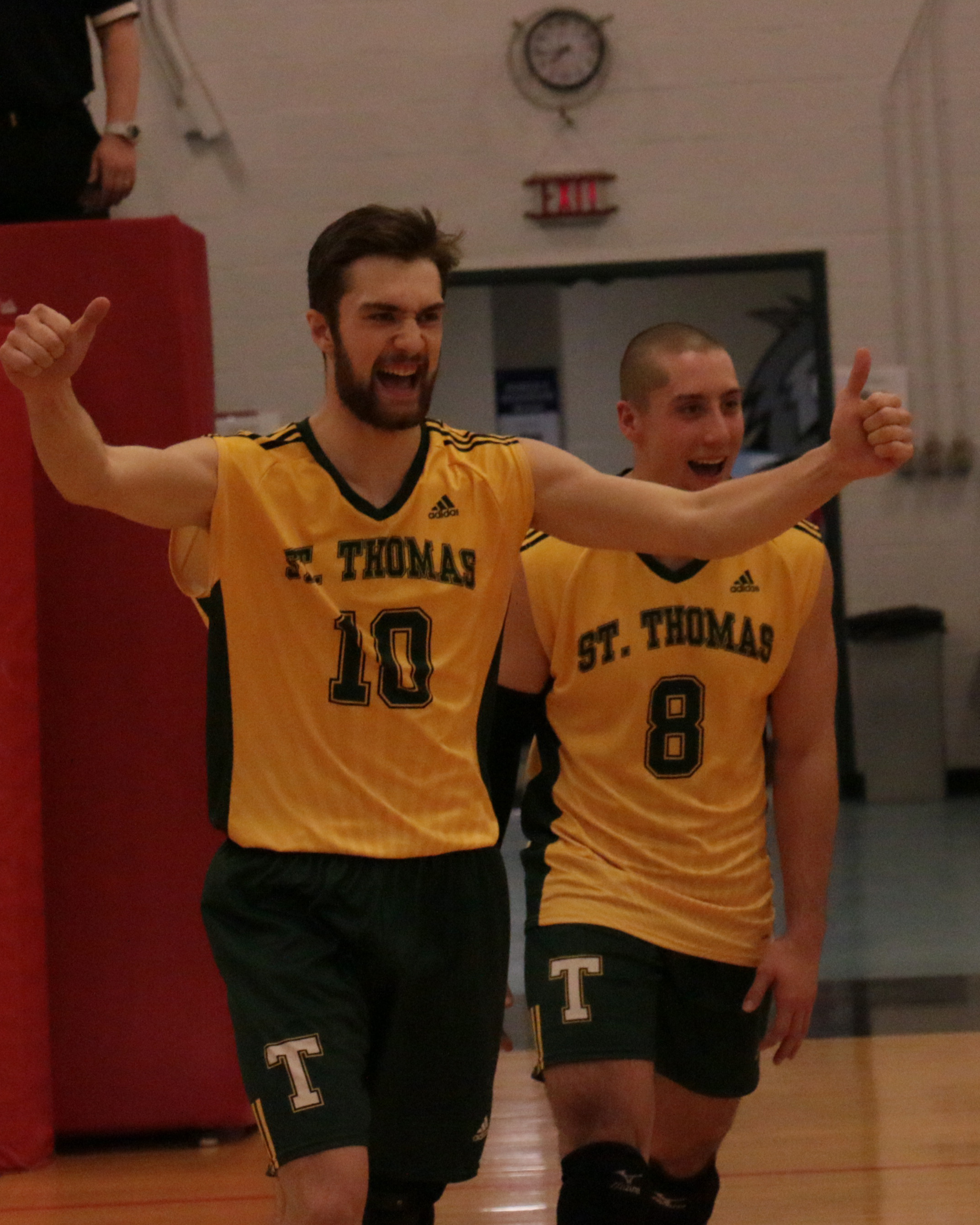 “We played well the first two sets,” said Seawolves setter Patrick Kendall. “But we just didn’t do so well on serving.”

Nick Fraser, who came away from this game with nine kills and one ace, believes that with some fine tuning on defence and serving, the Seawolves will be able to beat the Tommies in their next matchup.

“They have a nice team, good defensive players, good at getting themselves together as a team,” Fraser commented after the game.

“For us, it’s something we need to work on. Next weekend, we’re gonna give it to them.”

Faulty serves were an issue for both sides, with the Wolves giving up a whopping 26 points on errors.

Hamilton led the Seawolves with 16 kills and 2 service aces, while O’Grady chipped in with another 10 kills.

Stephane Blinn responded for the Tommies with 9 kills and 2 aces and combined with Sirois was an unstoppable force in the fifth deciding set.

The Seawolves drop to 1-1 on the season, while the Tommies improved to 2-0.

The next matchup for both teams will be on November 19, when the Seawolves will travel to Fredericton looking for some redemption against the Tommies.

Game time is scheduled for 4 P.M. in the Lady Beaverbrook gym and can be streamed on the internet at acaatv.ca.