With Bell Let’s Talk taking place this Wednesday (January 25), many have pledged to help eliminate the stigma surrounding mental illness. Yet, how is eliminating this stigma possible when people struggling with mental illness are constantly villainized in television and in films?

Take Fox’s hit Batman origin story television series, Gotham. As anyone who has read a single Batman comic knows, the vast majority of villains in this universe are “the criminally insane”. The Joker, the Riddler, the Mad Hatter; they are arguably some of the most iconic villains of all time, and all three are mentally ill.

Consider the Riddler’s origin story. Edward Nygma’s constant need to turn everything into a riddle is played off as a joke, but is clearly a symptom of Obsessive Compulsive Disorder. Then, in the second season, he appears to have Dissociative Identity Disorder, in which an “evil” version of himself takes over and wreaks havoc.

These are characters who are supposed to scare audiences. They appear to be ruled entirely by their mental illnesses, and Gotham explicitly conveys that this makes them dangerous. Ed Nygma strangles his girlfriend, and then the writers have his “evil” personality take her body and hide it. Jerome Valeska, the character who presumably will become the Joker, claims that “sanity is just a prison in your mind. Why be a prisoner? Be free, like us!” right before he uses this “freedom” to shoot somebody in the head.

As of the most recent episode, Gotham averages around 3.69 million viewers an episode. In an article from Business Insider that ranked the most popular television shows of 2016, Gotham ranked fifteenth. Think about that for a second. This is one of the most popular shows on TV right now, and this is how people with mental illness are being depicted – as murderers, menaces, and a danger to society.

Films are guilty of doing the exact same thing. Psychological thrillers have been immensely popular since the days of Alfred Hitchcock, and the genre is still going strong.

Released on January 20 of this year, Split is a horror movie about a man with Dissociative Identity Disorder who kidnaps a group of young girls. The film effectively paints people with this disorder as dangerous and uses the illness to instill terror into its audience. It is a grossly inaccurate portrayal, and yet turned out to be extremely successful in its opening weekend.

Lisa LeBlanc, a peer support leader with #HERE4U on campus, weighs in on the subject.

“People with mental illness are absolutely portrayed in a negative light, usually for entertainment value,” LeBlanc agrees, but then continues on to say, “though I am not sure if these shows and movies will hinder how people view [mental illness]. Some people, I’m sure, will be easily swayed, but realistically [almost] everyone knows somebody with a mental illness, whether it is a friend, a family member, or themselves. They will develop their views about mental illness from real life experience, and not from television shows and movies.”

While this is true, it also solidifies why events like Bell Let’s Talk are so important. In a world full of negative portrayals, people need the chance to stop and think about what someone having a mental illness really means. In most cases, it does not mean they are going to kill someone and then leave a trail of riddles leading to the body, like Ed Nygma, nor does it mean they are going to go around kidnapping people, like the antagonist in Split. It simply means that these people face challenges in life that others may not, and the stigma surrounding mental illness certainly isn’t helping.

On January 25, put aside what television shows and horror movies may dictate and take a few minutes to talk to someone about mental illness. There are multiple events happening on campus that can help you: #HERE4U is hosting a pizza party from 11:30-1:30pm in front of Ward Chipman #28 to raise awareness, and the SRC are hosting a Tweet-A-Thon from 2-4pm at Howlers. 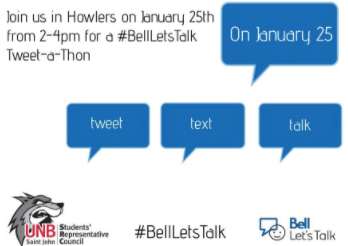 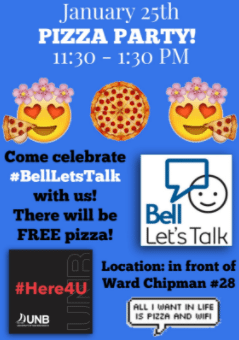