Whether you lived through it or you experienced it vicariously through Eric Forman’s basement, the seventies is a decade that we all know well. Riel Nason brings the age of ABBA and Zeppelin to life and paints it anew in her novel, All the Things We Leave Behind, which is to be featured in the Lorenzo Reading Series here at UNBSJ this week.

Taking place in rural New Brunswick, circa 1977, All the Things We Leave Behind tells the story of Violet Davis, a teenage girl who suddenly finds herself responsible for her family’s antique business when her brother, Bliss, pulls a disappearing act. Left alone for the summer while her parents search for him, Violet struggles with managing her responsibilities, her relationships, and dealing with strange, ghostly encounters.

I’ve been reviewing the books in the Lorenzo Reading Series for just over a year now, and I can say without a shred of hesitation that All the Things We Leave Behind is my favourite book thus far. Nason has managed to tell a story unlike any other. She cleverly combines elements of historical fiction, magic realism, and bits and pieces of New Brunswick culture that will leave any local chuckling.
Personally, there were moments where I almost forgot that this story takes place in the late seventies, purely because the characters, particularly Violet, are so personable. We can either relate ourselves to them, or relate them to other people in our lives, and that makes it feel much more current than the narrative actually is. It’s little things like descriptions of station wagons with vinyl seats, mentions of glass soda pop bottles, and appearances made by boys with perms, beards, and aviator sunglasses that they wear indoors that remind the reader that – “hey! This isn’t 2017! That’s why she can’t just use a cellphone to call her parents.”

In a way, Nason seems to paint this simpler time as both a blessing and a curse. On the bright side, it was so much easier to just enjoy life before the burden of modern technology got in the way. Can you imagine just sitting and enjoying the sound of the summer rain while sipping Sprite from a glass bottle, without the ever present buzzing of a cellphone? Because, as someone who has grown up in the digital age, I can’t. Sometimes, when the constant connectivity gets too overwhelming, I almost wish we could revert back to the good ol’ days.
But then there’s the darker side of a world without constant connectivity – that being that Violet’s brother was capable of just… vanishing. Today, you could just shoot him a quick text to see if he was okay, or at the very least track his digital footprint to find him if he wasn’t. But back then? Nason seems to paint a hopeless picture of a needle-in-a-haystack type search, in which Mr. and Mrs. Davis have no choice but to traipse around the country, showing their son’s picture at gas stations and hoping someone, anyone, has seen him. The ease of technology obviously wasn’t present in 1977.
This trend of the good vs. the bad seems to continue with the cheerful, bright imagery vs. the grim, creepy imagery found in the novel. Certain excerpts are as dark as the Christmas in July celebration is light; namely, scenes involving the “boneyard” and ghostly spectres of roadkill.

In the novel, the “boneyard” is a place in the forest where government officials dump the corpses of all the deer and moose that are killed along the highway. It is a grotesque, disturbing description, filled with dead eyes, rotting heads, and ribs jutting out of broken animals. It’s just filled with piles upon piles of poor unfortunate roadkill, and Bliss makes a point of mentioning how “they aren’t even buried”.

This is probably why the concept of “ghost herds” comes up in the novel, in which the spectres of vengeful roadkill run out onto the highway in the dead of night. Violet even appears to encounter one of the ghostly deer early in the book, and the entire sequence reminded me profoundly of magic realism. Initially, the concept of ghost animals seems ridiculous – but, then again, it also feels plausible with how Nason describes it. If ghosts do exist, and if this is a world where the supernatural seamlessly blends with reality, wouldn’t it make sense for the millions of animals killed by careless drivers to be the most vengeful spirits of all? Some people don’t even swerve, and worse – some people kill animals that wander out onto the road on purpose. If I were a ghost deer, or ghost moose, or ghost raccoon or fox or porcupine, I’d be pretty ticked off, too.

That being said, the vibrancy of Violet’s day-to-day life perfectly balances out the darker, more grisly parts of the story. As her name would suggest, Violet’s world is very colourful; her family’s antique store is located in a bright purple barn, nestled in the warm, welcoming heart of New Brunswick in the summertime.

In fact, one of the best parts of All the Things We Leave Behind was reading about local areas, such as Kings Landing Historical Settlement and the graffiti covered rocks that line the highway. It felt so surreal, to be reading a work of fiction that could easily be enjoyed by people all over the world, and finding places which I’ve stumbled across dozens of times whilst living in New Brunswick my whole life. I found myself wondering what people who don’t live here would picture when reading about these places.

Of course, that makes the book serve as a bit of an educational tool to non-locals. Reading about the picturesque views and vacation spots in New Brunswick just makes you want to get outside and explore, like Violet and Bliss did so often as children. To me, this is what makes All the Things We Leave Behind such a perfect addition to the Lorenzo series; it both entertains and educates, as all of these books should and so often do.

When you combine the supernatural elements, picturesque New Brunswick scenery and the novelty of the seventies, you get an altogether riveting story that readers will not want to put down. This local piece of literature is an instant classic, in my opinion, and I think absolutely anyone could pick it up and have some fun with it. There are heartfelt moments, tear jerkers, and laugh out loud scenarios galore. It is beautifully written, with some excerpts sounding like they stumbled right out of a love sonnet: 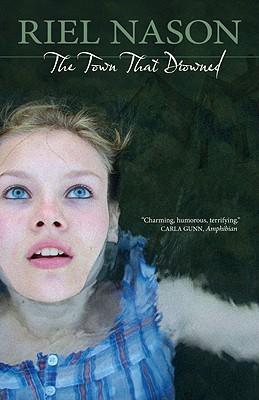 “Hart sounds the same as heart. And hearts can be broken.”

But this is nothing new from Riel Nason. Her previous novel, The Town that Drowned, is critically acclaimed, having won the 2012 Commonwealth Book Prize for Canada and Europe, the 2012 Margaret and John Savage First Book Award, and the 2013 Frye Academy Award.

Rachel Friars, co-editor of Vox on campus, recently read The Town that Drowned and gave The Baron her opinion.

“The Town that Drowned was a great read. Historical without being too dated, Riel’s book was an incredible blend of fiction and history, [and was] entertaining all the way through,” Friars stated, adding that, “One of the best elements was the ambiguous nature of the supernatural.”

Clearly, Nason excels at mixing modern historical fiction with elements of the supernatural and her work proves to be a success time and time again because of her remarkable talent. All the Things We Leave Behind is clever, thought provoking, and classically nostalgic, and I can say wholeheartedly that I look forward to reading whatever she comes up with next.

Riel Nason will be doing a reading from All the Things We Leave Behind in the Ganong Hall Lecture Theatre on February 23rd at 7:00pm. Admission is free, and all are welcome and encouraged to ask questions during the Q&A session that will follow the reading.