The Seawolves lost to the Mystics by a score of 83-66.

The first quarter saw the second slow start for the Wolves of the weekend, only able to score five points, all of which came from Liam Sipkema and Hunter Gray.

The Wolves only shot 13% from the field in the first quarter, something that did not help them against the Mystics, who are the 10th best team in the country. 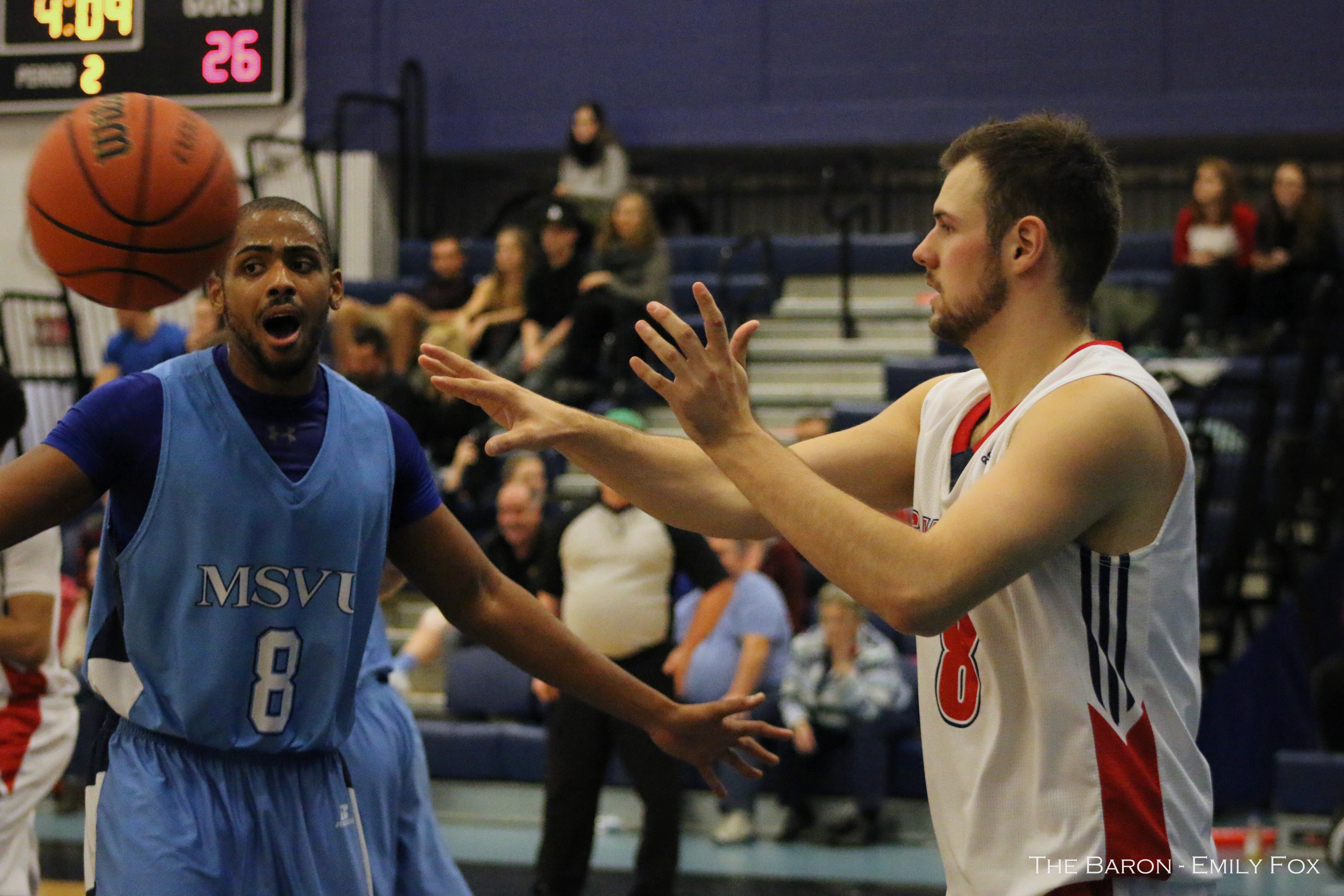 The Mystics on the other hand, seemed to make every shot that left their hands, and led by bench player Liam Mitchell they took an early lead of 24-5.

The second quarter started out with some major substitutions for both teams, and it took them both some time to score. The first successful shot didn’t happen until almost three minutes in. Led by Mitchell, the Mystics were able to go on a ten point run before the Seawolves could respond.

When the Seawolves were finally able to come back with a run of their own, they scored 12 points in the remaining five minutes of the quarter.

Two free throws from forward William Legere ended the first half with a score of 43-17 for Mount Saint Vincent.

“[I] was glad to have the first two quarters behind us,” said head coach Peter Vincent after his team’s loss, adding rather forlornly that “[the first half] was not pretty.”

After halftime, the Seawolves appeared to be re-energized and were able to outscore the Mystics 25-18 in the third quarter.

“We had a great second half, we won the third and fourth”, said Vincent. “Being able to see the ball go through the hoop – that’s obviously a positive for next week”.

Although the Mystics started with a quick 6-0 run, they were shut down by some big shots from the Seawolves’ Legere and Sipkema.

Both teams traded points back and forth throughout the quarter, but the Mystics were able to come out on top with a score of 61-42.

The final quarter started strong for the Wolves as Steven Ryan came off the bench to hit two three pointers back to back.

The two teams continued to trade points, and the Wolves came as close as 12 points with two minutes left. 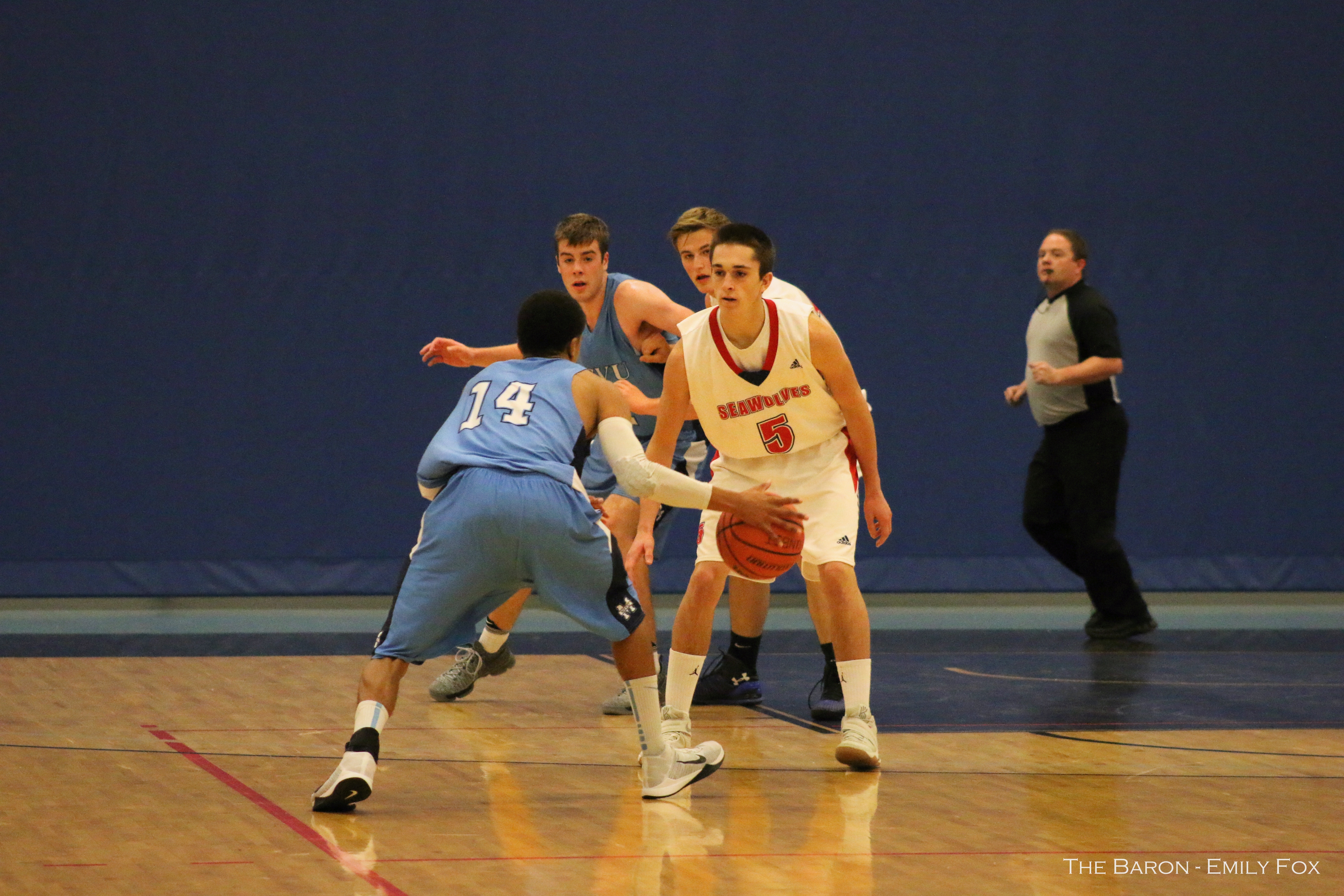 Two rookie Seawolves  then showed their strengths near the end, as Keshaun Skeir (#3) finished the game with a three point shot, followed by two foul shots from H. Gray.

“All of our rookies have really stepped up this year [and] that’s fantastic. You’ve gotta have guys step up when other guys are hurt, and [the rookies] have,” said Vincent after H. Gray’s impressive weekend.

“It really bodes well for next year,” he added, “It means we are going to be that much better.”

Mitchell of the Mystics led all scorers with 28 points and 2 rebounds, while teammate Ryan MacPhee added an additional 15 points and 8 rebounds.

Legere and H. Gray led the Wolves with 16 points each, and 9 & 7 rebounds respectively. Steven Ryan also came off of the bench to add another 14 points for the Wolves.

With the loss, UNB Saint John drops to 4-17, and remain eighth in the conference. The Mystics are now 20-1, and remain in first place.

UNB Saint John is scheduled to play on Saturday, February 25th, as they travel to Fredericton to take on the St Thomas Tommies in their final game of the regular season. Tip off is scheduled for 4:00pm for the men’s team and 2:00pm for the women’s team.

Mount Saint Vincent’s next game will occur on Sunday, February 26th, as they host the Mount Allison Mounties. Tip off is scheduled for 3:00 pm.

All games can be streamed online at acaatv.ca