When I Read It

Sometimes, a book just gets to you. It doesn’t happen all the time, or even most of the time, but when it does, it’s wonderful. Allison Wearing’s memoir, Confessions of a Fairy’s Daughter: Growing Up with a Gay Dad, takes readers through the key periods in the lives of herself, her father, and her mother as they all discover her father’s sexuality. Last week, the Lorenzo Society invited Wearing to be a part of their 2016-17 Reading Series, and they also partnered with the Imperial Theatre to bring her to Saint John to perform her one-woman show, Confessions of a Fairy’s Daughter, based on her book of the same name.

Growing up in Peterborough, Ontario, in the 1970’s, Allison Wearing’s life begins conventionally, but takes a turn around her twelfth birthday when she discovers that her father is living as a gay man in Toronto. Told in four parts; “The Way I Saw It”, “The Way He Saw It”, “The Way She Saw It”, and “The Way We See It Now”, respectively; Wearing divides the perspectives of her family into cohesive sections that fall together with a profoundly resonant symmetry. Wearing explores the very real reactions and fears of her family, telling a story that transcends personal experience. Powerful, poetic, and brilliant, the novel presses against the soul of readers, offering a linear and captivating emotional account of the life of a family that implodes, and then somehow reassembles itself.

Beginning with her early childhood, Wearing sets out the apparent normalcy of her life, providing readers with a comfortable glimpse into the mind of a girl who thought she understood everything. As her family begins to break apart, though, readers feel the slow breakdown of ‘normal’ in Wearing’s life as painfully as if it were their own. Readers watch Allison sink into the depths of confusion and despair and then come to terms with the life she realizes she would never trade for anything.

Her father’s section, taking place in the middle of the novel, is arguably the most powerful. A collection of newspaper clippings, handwritten letters, and documents from the 70’s and 80’s, readers get a real-time glimpse into the life of Wearing’s father. All of the pain, fear, and joy that came from finally being who he is is exposed on the page. In this section, Allison draws together historical events from these decades, chronicling the gay-rights movement in Toronto as well as the strides forward and setbacks in the gay community and society’s understanding of homosexuality. Beautiful and educational, Allison Wearing and her father teach and stir the elegance of language all in one section.

Her mother’s section, “The Way She Saw It”, is carefully negotiated. A private woman, Wearing structures her mother’s voice as a Requiem. Written years after the events that altered her family so drastically, “The Way She Saw It” is the artful closing of a gap that took so many years to mend. Wearing negotiates the delicacy of her mother’s privacy and the desire to give her mother a voice with all the grace and poetry of her previous sections.

Readers grow to love and hope for Allison’s family almost without realizing it, until we feel the joy of the last portion: “The Way We See It Now.” After such turmoil and confusion, this section, like the three previous, is a balm to the soul. Grace and brilliance radiate from the final chapter in the memoir, a true light at the end of the tunnel.

Memories are part of what shape us into who we are: the people, the places, and the events that change our lives and imprint us with lasting feelings. Allison Wearing’s memoir is all at once a chronicle of this phenomenon, and a step beyond it. Her memories are specific—her father baking croissants on Sunday mornings and dancing with her in the garden, her mother curled in a rocking chair listening to her favorite music—and yet, they are universal. We all have traditions, and we all know our parents’ habits. What only some of us know is the moment when those things take on an entirely new significance is when they cease altogether.

Detailed and precise, Wearing’s memoir is unquestionably the story of her and her family, but it is also one of profound significance for every reader. Things can fall apart, and they may do so drastically. Confessions of a Fairy’s Daughter is about being human and letting other people be human without smothering them into the box of what other people think they should be.

Touching the hearts of every reader, Confessions of a Fairy’s Daughter is relatable, powerful, and tragically relevant. Forty years after her father’s coming out, many of the same issues surrounding sexual orientation are still prevalent today. Wearing’s book is entertaining and heartwarming, but it is also educational, reminding us that the steps society has taken were not so long ago, and that things can change at any moment.

When I Heard It

Allison Wearing was invited to read at UNBSJ, as part of the Lorenzo Reading Series, on March 1st in the Ganong Hall Lecture Theater. Instead of specifically reading from her book, as many authors do, Allison took advantage of her book being a memoir and used her time to discuss Confessions as a whole.

A book about very specific moments in her life, Allison is the chief authority on all things Confessions, and treated readers to an inside glimpse as to how the book came into being, and her family’s reaction to it. She discussed concerns, battles, and fears over the course of the book’s development, and the way in which it became a group effort on the part of her family. Allison took the opportunity to pull back the curtain on Confessions, enticing those who hadn’t read the book, and providing a new insight for those who had.

Because most of Wearings’s characters are real people and, of course, still living four years after the book’s original publication, her reading was a kind of ‘post-script’ for those who had read the book and become so attached to the people in it. Finding out that her father’s sister, a brief but memorable presence in Confessions, had died only months ago when she lived eternally in the snapshot readers saw, was audibly jarring for much of the audience. On a brighter note, Allison revealed many more loving details about her family and their new order alongside the continual acceptance they radiate.

After reading from a small section of Confessions about truth, and the relief it brings alongside pain, Wearing closed the reading with questions. There, she had the opportunity to explain the cover of her book and the humanity inside its pages. Allison Wearing took the Lorenzo Reading Series outside of its bounds of readings with far more discussion.

When We Saw It 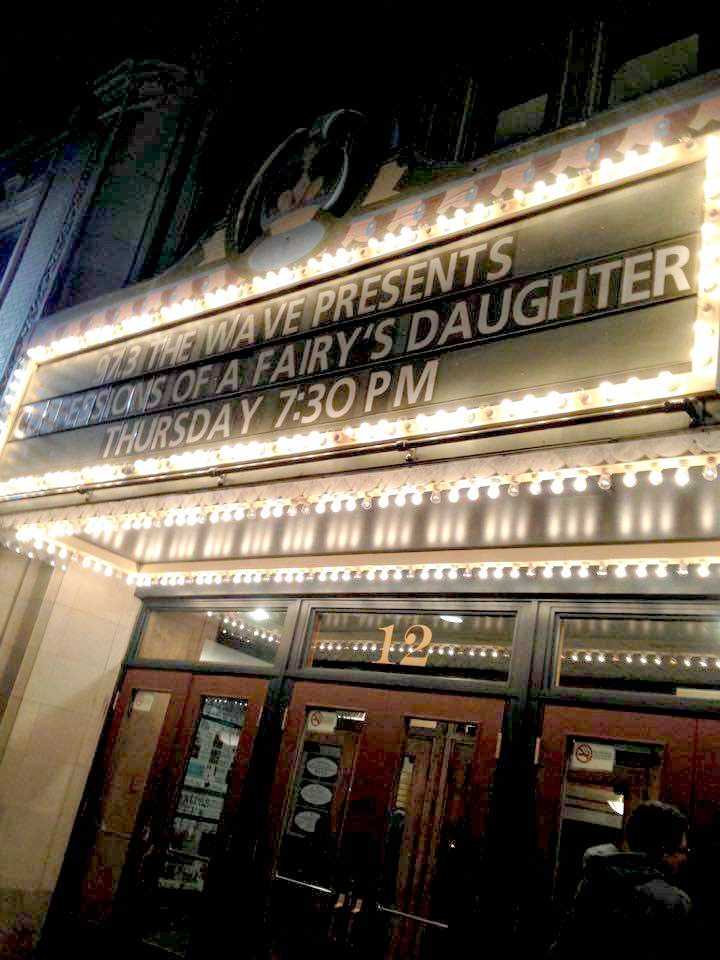 Finally, Allison Wearing ended her week in Saint John by performing her one woman show, Confessions of a Fairy’s Daughter, at the Imperial Theatre on March 2nd at 7:30pm.

Written before the book, the play covers Allison’s perspective of events from her childhood onward. However, nothing is neglected, and those who have read the book can fill in the blanks, and those who haven’t don’t feel like they are missing anything.

Allison stands on the stage the entire time, surrounded by a very sparse set of a coat-rack and a laundry hamper. This makes it clear that Allison is the focus of the show, and the furniture is there only to provide elements of dimension. As the show progresses, Allison switches out of basic costumes to indicate a change in time or age, having one sided conversations in which the audience can easily imagine the other half. This way, although it is only Allison who is physically on the stage, the audience feels as though they are watching a performance with multiple people. She also performs other characters, like her childhood friend Jessica, who becomes remarkably separate from the Allison on the stage.

Each scene is separated by pauses and moments of stillness, before she jumps into the next section, providing breaks without her ever having to leave the stage. Her performance is also timed to various pieces of classical music—some with important significance to her childhood. On the wall behind her, relevant pictures of her family play on a slideshow, also timed to each scene. This adds to the effect of the show having multiple cast members, and gives the audience an element of reality in the surreal moments that Allison sets up: these are real people, and this is based on real events.

Wearing, currently fifty years of age, performs her progression from childhood into adulthood with remarkable ease, encapsulating a classic coming of age story within one performance. An exquisite actress, Allison moves through the twists and turns in her life with practiced outward ease, and by the end of the play several audience members were hurrying to conceal their tears when the lights went up. As deeply moving as the book, Allison Wearing thoroughly wrenched the hearts of Saint Johner’s one last time on Thursday night.

.Connor DeMerchant, who attended Allison’s performance at the Imperial, greatly enjoyed it, saying that he, “Loved how she followed the book in her performance, but also told some new stories. [Wearing] successfully kept the audience’s attention throughout the entire performance. I felt that she told her father’s story with honesty and in a way which was highly entertaining.”

Following the performance, choice members of the audience were invited to a special book club with Allison, providing even more insight into the book’s content and ‘characters.’