Do all of your end of semester assignments have you down? Are you feeling the pressure of impending term papers and exams? On March 22nd, take a little break from all of the chaos and come out to support your fellow students in their Spring Concert, hosted by the Lorenzo Society.

While much of the Lorenzo Music Series has featured professional musicians and targeted an older audience from around the community, Wednesday’s Student Concert intends to give UNBSJ’s talented student musicians a chance to shine, and provides an extra incentive for music lovers young and old to come and watch them play.

According to Li-Hong Xu, music coordinator for the Lorenzo Society and UNB Saint John physics professor, the concert will “be filled with a fascinating variety of music by our talented students, ranging from vocals to instrumentals and from solo acts to groups performances.”

Special guests set to perform at the concert include: the Heartbeat! Tucker Park Choir, consisting of students from UNBSJ and Dalhousie Med; the Ceol Band, featuring students from both campuses who perform Celtish music; and classical pianist Michael MacMillan, who will be performing the work of Franz Liszt.

Regarding what inspired the Lorenzo Society to put together a Student Concert, rather than solely featuring professional musicians in the Music Series, Xu explains that “a number of years ago, when [she] became the coordinator for the Lorenzo Music Series on campus, [she] noticed that UNBSJ has an immense amount of [student] talent, and [the campus] needed a venue to showcase it all.” Thus, the Student Concert was born. This is the third consecutive year that the event has taken place.

Xu also feels that it is a good event for encouraging student engagement at UNBSJ. Given that everyone has busy schedules and cannot always participate in everything, an event that gives students a chance to showcase their musical abilities, which may or may not be related to their degree and/or field of study, is a great way to get them involved on campus.

She also emphasizes that “[UNBSJ] need[s] more venues for student, faculty and community interaction”. Given that music is an interest that almost everyone shares, the Student Concert is a great opportunity to meet new people, both at UNBSJ and in the Saint John area. 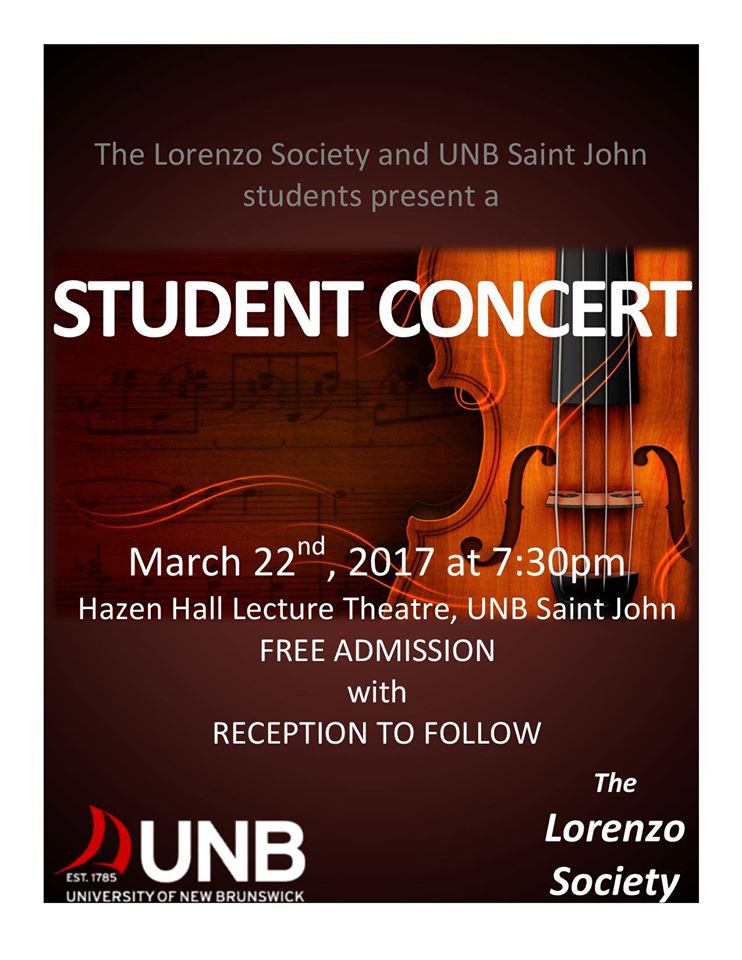 All of the students set to perform on Wednesday, be it a solo act or as an ensemble, have been working incredibly hard all year to prepare for this event. Both the Heartbeat! Tucker Park Choir and the Ceol Band meet every Wednesday at the DMNB piano lounge, from 6:30 – 8:00pm for the Choir and 5:00-6:15pm for the band, to practice with choir director Janet Kidd and band director Dr. Wendy Steward. Both musical groups are always open to new student members.

The Student Concert and reception will take place from 7:30-10:30pm, in the Hazen Hall Lecture Theatre, and there is no admission fee. All are welcome to attend because, as Dr. Xu attests, “music is the best medicine” for anyone who is feeling stressed.