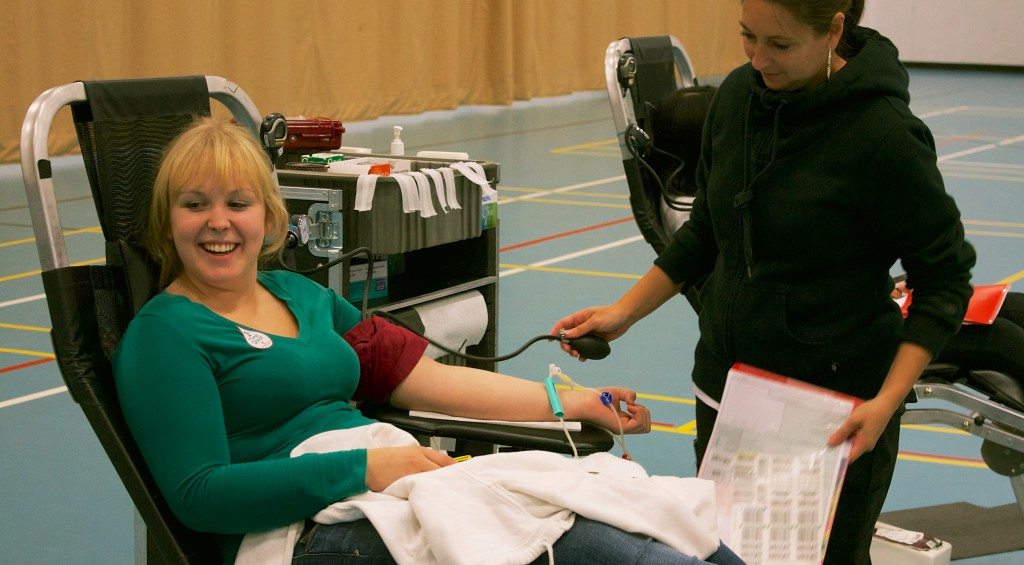 During the afternoon of Friday, Nov. 15, UNB Saint John’s Athletics Centre was swarming with activity – but not in the traditional athletic sense.

Students sat waiting for their appointment, filling out forms and preparing to donate blood. When their names were called, they went to assigned stations, where nurses and volunteers began drawing blood. The whole process took no longer than 40 to 50 minutes per student.

He explains that their success greatly depends on the recruitment. “Blood donation is something people would say, ‘Yes, I’ll donate,’ but it is not at the top of their minds,” says Bishop. “We try to get a lot of people to contribute, but they don’t get the opportunity. If you promote the event on campus, more will come.”

The organization needs promotion to get its message across to the public.

As part of his job, Bishop does the rounds at several colleges and universities, as well as high schools. “I try to visit high schools in the province because a lot of our blood donors are aging,” says Bishop. “I feel universities are some of the best spots to donate, because they want to improve their lives.”

Stephen Nowoselki, a first year science student has been keen on donating blood for a long time. “I’ve always wanted to give blood,” says Nowoselki, “I also [want] to be an organ donor.”

Canadian Blood Services has been working hard at raising support over the past few years.

CBS has recently set up a program called Partners for Life.

says Bishop. “UNB wasn’t a partner when I came on board. I realized, ‘This is a population of 3,000 people. Why don’t we have clinics across the street from where donors are?’”

Ashton Moon, a nursing student, supports the idea of young people donating blood. She says she found inspiration from her field of study and her family. “I’m going into nursing, so it would be appropriate for me to donate,” says Moon, “My older sister has done it many times, so she motivated me to do it.”

The large turnout of students proved to be encouraging. Past clinics held at UNB Saint John took place in the Whitebone Lounge, but had to be moved to the gym due to the vast amount of interest.

“We used to set up our clinic at the Whitebone Lounge, but it wasn’t very compatible for students,” says Bishop, “Now, we have a more spread out approach.”

Canadian Blood Services has also partnered with Shinerama – a group dedicated to raising money for cystic fibrosis research. The decision to partner with CBS took place in July 2013.

Michael Crate, Shinerama Coordinator felt the partnership was logical. “We were talking about transplants and how people with cystic fibrosis need them,” says Crate, “Originally, we were just going to have a table, but, while working with the Students’ Representative Council, I heard about the blood drive [and] I thought it would be a great opportunity to promote that, as well as encourage students to give blood.”

Bishop hopes to encourage more people to contribute by donating blood as there will always be a need for donors.

“Obviously, it is not for everybody – some [people] don’t like needles or the thought of blood, but I encourage them to give it a chance,” says Bishop. “Giving up some time to donate blood can save a life.”

The consensus among students seems to be positive. “Many of the people I’ve talked to have booked appointments says Nowoselki, “it seems like a lot of people want to get involved with it, and the general attitude has been very positive.”

Moon agrees with Nowoselki’s view of the blood drive. As she explains, several of her friends and classmates were enthusiastic about becoming donors. “A lot of people…I’ve talked to are definitely coming to donate blood.”

Canadian Blood Services hopes to educate pople about the importance of giving blood. Bishop encourages prospective donors to realize that it is not just for victims of car accidents – an image that is frequently portrayed in the media.

“I want people to think about donating, because there are a lot of things it is needed for: cancer, blood disorders and infants that may require blood transfusions,” says Bishop, “I want people to understand giving up an hour to donate is definitely worth it.”