The CAN-AM Classic is an international inter-collegial basketball tournament that annually features two teams from the United States and two teams from Canada.

In total, eight teams are participating in the tournament, with one men’s and one women’s basketball team competing from each school 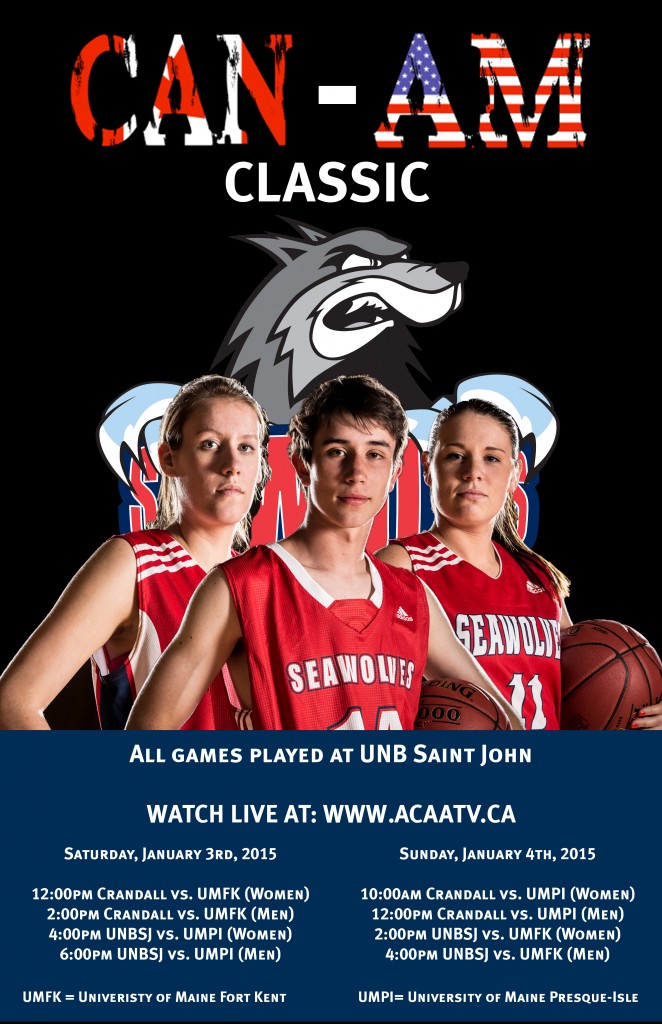 Natasha Kelly, varsity coordinator for the Seawolves, says that this tournament is born out of the desire to foster sporting relationships between U.S. and Canadian schools:

“After Fort-Kent hosted the inaugural tournament last year, it was UNBSJ’s turn to host. Next year, the CAN-AM will be hosted again in Maine. It’s a good opportunity for our men’s and women’s teams to get in some exhibition games before the second half of the season jumps off.”

Not only is this a timely opportunity for the well-rested varsity teams to get back into sync, minor league youth teams from around Saint John have the opportunity to watch some quality basketball this weekend, says Kelly.

“We thought it would be a good experience for youth basketball players in our city if we let them have their own tournament on the side courts and be able to watch some high-quality university basketball.”

Adding an interesting tidbit of information, Kelly says that originally, the Dalhousie

Agricultural Rams were supposed to play in this year’s tournament as they had last year:

“When the Rams weren’t able to form a basketball team this year, the Chargers graciously stepped in to play and saved the tournament.”

The first game of the tournament was kicked-off by the Crandall Chargers and Fort-Kent Bengals women’s teams.

In the first game of the 2015 CAN-AM Classic, the University of Maine Fort Kent Bengals defeated the Crandall University Chargers 68-63.

The first half did not reveal much difference between the two sides until the Chargers sprinted to outscore the Bengals 27-17 in the third quarter.

Chargers’ Senteria Renwicks tallied 12 points and 11 rebounds – 8 of them being offensive rebounds – and played the entire forty minutes of the game. Her teammate Madeline Metallic scored 19 points and recorded 6 blocks, but their strong efforts were not enough to overcome a vigilant Bengals teams in the fourth quarter.

In the fourth quarter, the Bengals rallied back to outscore their opponents 23-15, allowing them to compensate for letting their guard down in the third quarter.

Bengals Ericka Saucier, undoubtedly the most impressive player of the game on either side of the court, netted 22 points, 14 rebounds (5 offensive and 9 defensive), and had 2 blocks in her 37:24 minutes of court time.

The tournament’s second game did not see dominance, but consistency from the victors, the University of Maine Fort Kent Bengals.

Their opponents, the Crandall University Chargers’ Igor Dias, Thomarcus Nix, and Nathanial Caesar all scored points in the double digits, but could not overcome a solid team performance by the Bengals who won the game 86-77.

Bengals’ Mauro Vicic, a Croatian native, dropped a game-high 25 points on the night and added 3 rebounds and 1 block, and made five three point shots.

The Chargers lost the game on giving away too many fouls, as the Bengals converted on 20 out of the 32 free throw shots.

Bengals’ Joseph McCloskey also had an impressive outing against the Chargers, tallying 20 points, 11 rebounds, and three blocks; all while playing the entire forty minutes.