The first Lorenzo reading series event began this week on Thursday, September 24 at 7pm in the Ganong Hall lecture theatre.

Beginning this year’s series was Marina Endicott, reading excerpts from her newest book, Close to Hugh, a clever novel featuring chapter-heading song titles playing on the similar sound between the words ‘you’ and ‘Hugh’. 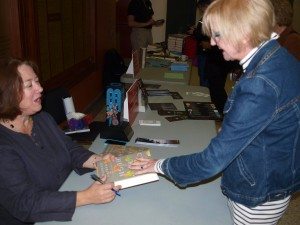 Alison Hughs, coordinator of the Lorenzo Reading Series, kicked off this year’s series with a book draw for George & Rue, the newest novel from this year’s One Campus, One Community, One Book special guest, George Elliott Clarke. Hughs also introduced this year’s reading series theme as “Intimate Encounters of a Literary Kind”, featuring 12 authors and nine readings.

Endicott began her reading introducing her novel, stating that it is “about love—of all kinds,” listing relationships such as lovers of all ages and that of mothers and sons. She read mainly from the mothers and sons sections in her slightly melancholy, very human novel highlighting it’s dreamy repetition and rhyme as well as it’s alliterative features.

During the question and answer upon being asked how she decided on her unique style in Close to Hugh, Endicott responded, “being beleaguered is a good way to start a novel”, referencing her difficulties as both a daughter and a mother and her prefeance to “write about life that I experience […] the content is the form”: vaguely reminiscent of Hemingway.

Close to Hugh also utilized what Endicott referred to as “vaudeville metaphor”, bringing her theatrical background into her creation of the novel, organized similarly to a collection of short stories or seemingly separate acts of a play. Endicott hoped to utilize the style to speak on the topics of gender ambiguity, technology, and human connections.

After the event the crowd continued to converse about literature and the reading, to drink free coffee and have snacks, or to buy the books featured in the Lorenzo Reading Series. Endicott did a short book signing, bringing the night to a cheerful close.

Marina Endicott was born in Golden, BC, currently residing in both Edmonton and Toronto. Endicott’s fourth novel, Close to Hugh is up for this year’s Scotiabank Giller Prize, a yearly prize dedicated to the arts, sponsored by Scotiabank, and featuring a 100,000 dollar prize for the winner and 10,000 dollar prize to each finalist. Alison praised Endicott’s novel for its “intensely appealing characters”, and stated that those characters “form an alliance closely with” the content of the novel.

For more information on Marina Endicott and her novels, visit marinaendicott.com.

Her novel, Close to Hugh, can be purchased at the University of New Brunswick Bookstore.

To find out more about One Campus One Community One Book, stop by the H.W.K. Commons building or the UNB Bookstore.