Before the holidays, #HERE4U had been posting a mysterious elephant on social media: 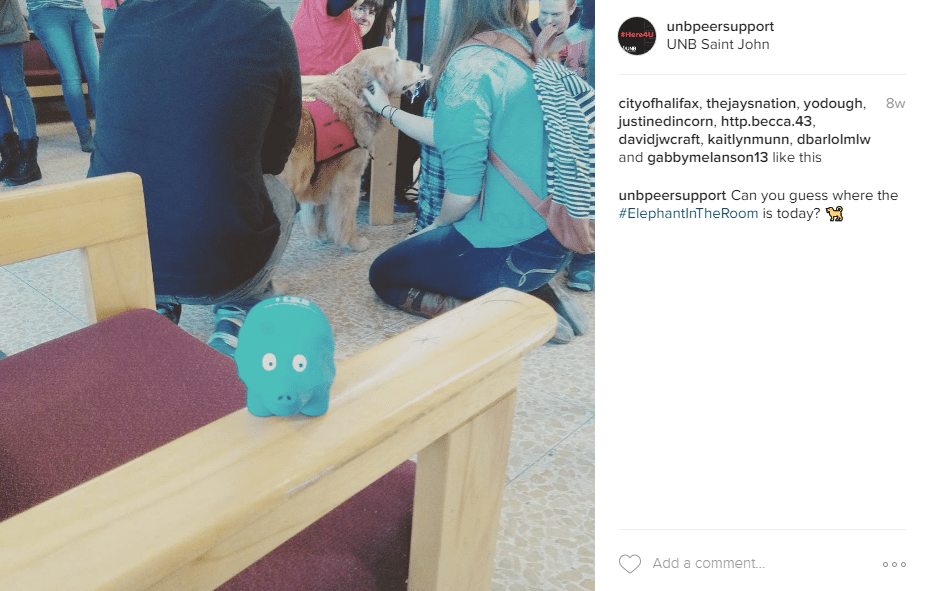 The mystery behind the elephant was finally explained on February 2, when they launched the Elephant in the Room campaign at UNB Saint John.

The campaign was founded by the Mood Disorders Society of Canada and according to their website, it is “a national anti-stigma campaign designed to address the stigma associated with mental illness. When you display your blue elephant, you show that you care about the wellness of others and demonstrate that this is a safe place to talk about mental illness, without fear of being viewed differently.”

The anti-stigma blue elephants were handed out in front of Student Services to students and staff on Thursday morning, along with free cookies and bracelets, with the hope that everyone on campus would grow more open about discussing mental illness.

To promote the campaign, #HERE4U is holding a contest via their various social media accounts. One of the blue elephants will be hidden somewhere on campus every two weeks, and students are encouraged to try to find it for a chance at winning a $50 gift card to the campus bookstore.
#Here4U will post a photo of this elephant on their Facebook, Instagram, and Twitter accounts, and students are required to find the elephant and post their own photo of it, captioned with #ElephantUNBSJ, to be entered into the draw for a gift card. In total, there will be three gift card draws over the next six weeks. They posted the first hidden elephant Wednesday afternoon: 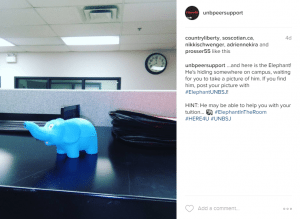 Bonus entries are given to students who take photos of other elephants around campus, posting them with the same hashtag or in the comments of the original Facebook post. Some students have already taken the initiative, snapping photos and videos of the elephants that they received at the launch.

The peer support leaders were thrilled with the turnout at the event, successfully giving away all of their elephants and cookies. They look forward to continuing the campaign on campus, and hope that all of UNB Saint John’s patrons will get involved and help end the stigma surrounding mental illness.